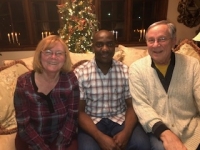 Haitian asylum-seeker Ansly Damus (center) with his American sponsors, Heights residents Melody Hart and Gary Benjamin. Damus was released from custody after the ACLU won a landmark case against the federal government.

Ansly Damus recounts his migration journey and quest for asylum with warmth, with gentle humor. The former electrical engineer and professor charms with his radiant smile, intellect, and storytelling. Periodically, he checks his phone because it is his sole connection with his family back in Haiti. It’s hard to picture him sitting in a county jail for two years without sunlight.

Damus would still be in the dark without the untiring efforts of the ACLU, his immigration attorney, and an involved Cleveland Heights community that includes an immigration activist, an empty-nest couple, and families who have provided friendship and support.

Damus crossed the Mexican border into the U.S. in October 2016 after a two-year trek that took him from Ecuador to Brazil and through Central America. His border crossing was an asylum request, which meant immediate detention. He fled Haiti because he openly criticized a powerful local politician, whose followers then threatened and attacked him. He left behind a wife, a 4-year-old daughter and an infant son.

Most U.S. Immigration and Customs Enforcement (ICE) detainees are housed at federal prisons, but some stay at approved jails, which lack prison resources. ICE moved Damus from Arizona, where he had entered the U.S., to Ohio. He spent two years in Chardon’s Geauga County jail—which has no outdoor area for detainees—while his attorney, Elizabeth Ford, and the ACLU fought on his behalf.

In January 2018, when it became clear having a sponsor to host Damus would aid in his release, Hill began reaching out to people. A compassionate couple of empty nesters, Melody Hart and Gary Benjamin, agreed to become his sponsors.

For months they visited Damus, developing a friendship that helped him through his detention and court process.

“After Gary and Melody came, my life changed,” said Damus. Through the couple, Damus was finally able to communicate with his wife and children in Haiti, albeit through a snail-mail relay of snap-shotted letters and Facebook messages.

“Not only did Melody and Gary agree to be sponsors,” said Hill, “they took on his case and created a community around him.” They organized meetings and arranged for French-speaking visitors. “They are model organizers in a case like this,” said Hill.

Meanwhile, Damus’ attorney and the ACLU kept fighting. “Damus was denied parole multiple times after he had won asylum on two separate occasions. ICE was refusing to follow its own parole guidelines, which is why the ACLU took the case to federal court and won,” Ford said. She explained that the December 2018 court victory, in which Damus was released under the condition of sponsorship, has significant implications for other asylum seekers who have been denied parole.

Damus has lived with Hart and Benjamin since his December release, and is, effectively, their dependent until his legal status changes.

Community support has grown since Damus’ case made the national media. After reading a Washington Post article about Damus, Heights resident Elana Baldwin and friends gathered their kids to make cards and gifts. For five families and their eight school-aged kids, welcoming Damus was a way “to get our kids active in social justice and community service,” said Baldwin. “When I told my kids about Ansly, they were absolutely struck by the idea that he was here without his family.”

Genevieve Baldwin, age 6, said it was important “because he doesn’t have his family with him, and he doesn’t have any friends. He could look at our pictures to make him happier.” Her gesture had the desired effect. I watched Damus’ face light up as he received a hand-crafted picture frame, keepsake box, and beautiful children’s art to fill his room.

He will be a volunteer teacher of electrical skills at the Home Repair Resource Center this February and March.

Community members are invited to a Feb. 23 fundraiser to contribute to Damus’ legal expenses and family needs. E-mail jeffsmith2756@gmail.com or cathy.a.crimi@gmail.com for details.