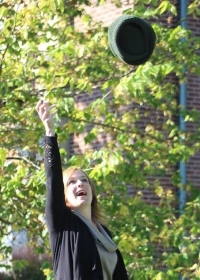 Rachel Mullen is back at UH City Hall after 25 years away.

In the summer of 1993, John Carroll University student Rachel Mullen found herself with more free time than she could handle. She needed something to do.

At the time, Mullen lived in a duplex across the street from University Heights City Hall. She walked across Warrensville Center Road, marched up the steps to city hall and asked the first person she saw if there were any internships available.

Community Coordinator Walter Stinson told her nobody had asked to intern before. “Mr. Stinson said the city couldn’t pay me,” Mullen said, “but they could use the help.”

So, in the summer of 1993, Mullen began her first tour of duty with University Heights as the first-ever intern to Mayor Beryl Rothschild. Now, 25 years later, she’s returned to UH City Hall as executive assistant and special projects coordinator for Mayor Michael Dylan Brennan. Her first day back was Oct. 15.

“I am very excited to be here,” Mullen said. “It’s funny how life has a way of circling back.”

Among the special projects that Mullen will manage are the Civic Awards, the State of the City Address, the Summer Concert Series and the Memorial Day parade.

She still looks back fondly on her internship.

“I put together welcome packets for new residents and worked on some lists compiling information. I also took constituent calls regarding issues. I did whatever Mr. Stinson and Mayor Rothschild needed,” Mullen recalled. “I bought a house in University Heights in 1995 and Mr. Stinson came to my home and handed me one of the Welcome Packets I used to put together."

Mullen most recently worked as a realtor for ProEdge Realty. A former banking officer, she has served as a project manager and a policy/news writer.