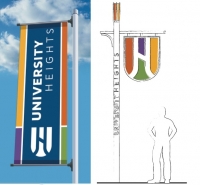 After months of research and planning, University Heights has a new logo.

The shapes in the new four-color logo form a U and H for University Heights; but the shapes aren’t random—they’re pulled straight from a map of the city. Just west of Warrensville Center Road and north of Fairmount Boulevard are several streets that form an H inside a U.

A committee has been working for months with consultants from Guide Studio on the city’s new logo and branding. UH City Council unanimously approved the logo at its Oct. 15 meeting.

Brennan said Guide Studio outlined several objectives for a new city logo and brand, including that it:

“The process was thorough. I’m pleased we met all of our objectives, and we are all thrilled with the result,” Brennan said.

The process began with a review of the city’s current brand and marketing materials, followed by a survey [sent] to city stakeholders and leaders. From there, tours of University Heights were conducted, and workshops began. Data and insights were combined into a Brand Strategy Platform, which included identification of audiences and a positioning statement.

The next step of the process is implementation.

Over the next few months, the new logo will replace the old doorknocker logo, and the city’s website and social media accounts will be redesigned. City vehicles will be remarked with the new logo, and new business cards and stationery will be ordered.

Next spring, new signs will be installed, and banners will be posted on light poles. “Visitors to University Heights often don’t know where our city starts and where it ends,” commented Brennan. “Banners will help solve this problem.”

Brennan plans to make city merchandise available to everyone. “I’d like to see us open an online store, where people can buy items with the new city logo,” Brennan said. “We’ll have the usual items, like shirts, hats and mugs, but I’d like to see us have items like Frisbees, water bottles, playing cards. The more creative, the better.”