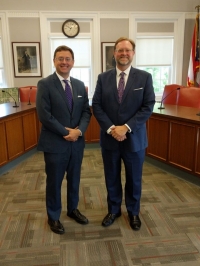 In an Aug. 14 news release, University Heights Mayor Michael Dylan Brennan announced that Mike Cook had been hired to be the city's first communications and civic engagement coordinator. In that role, Cook will be responsible for the city's media, outreach, and constituent services, and promoting the city's quality of life.

Brennan stated in the release: "Mike brings experience, as well as energy and creativity, to City Hall. He will be working closely with me, our city department, and city council to help us raise the overall responsiveness of city government to our residents, and with that, the quality of life in University Heights."

Prior to taking this new position, Cook worked for the Cuyahoga County Common Pleas Court; the Ohio General Assembly, where he was a legislative aid; and the American Red Cross, where he worked in communications and marketing.