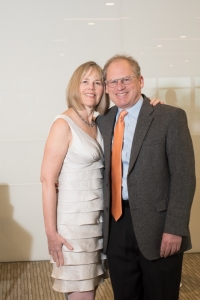 On April 16, Cleveland Heights resident Karen Jaffe received the 2018 InMotion Parkinson’s Visionary Award, presented biennially to an individual or family that has shown excellence in the Parkinson’s community by championing the fight against Parkinson’s disease through advocacy, research, volunteerism, or financial support.

The award was presented at “More than Motion, a Visionary Event” on April 16, at Jones Day in Cleveland. The sold-out event attracted more than 250 attendees and raised more than $85,000 (net) to benefit InMotion—a nonprofit Parkinson’s wellness center in Warrensville Heights.

Jaffe retired from a 24-year career as an OB/GYN shortly after being diagnosed with young-onset Parkinson’s, and dedicated herself wholeheartedly to the Parkinson’s community, where she quickly became a trailblazer.

She and her husband, Marc Jaffe, founded a grassroots nonprofit, Shaking With Laughter, and have raised more than $1 million for Parkinson’s research in its six years, earning her recognition in the international Parkinson’s community from the Michael J. Fox Foundation as one of its leading fundraisers. Karen Jaffe has served on the Michael J. Fox Foundation’s Patient Council for seven years and is active in Team Fox programming.

Because she lives with the disease herself, and comforts and consults many others, Jaffe has a deep understanding of how exercise and being part of a community sustains Parkinson’s patients.

She and four other leaders in the Cleveland community shared a similar vision and the sheer determination to help people struggling with Parkinson’s manage their daily lives more effectively and in a supportive community. In October 2013 they founded InMotion, which provides exercises classes, education, support groups, and healing arts to clients and their carepartners, all at no cost.

“Not only have Karen’s vision and devotion helped dramatically improve the way people are living with Parkinson’s in Cleveland, she is also a leader in the international Parkinson’s community, recognized for her advocacy, fundraising and innovation,” said Zack Paris, president of the InMotion Board of Directors. “We are thrilled to have presented the first InMotion Parkinson’s Visionary Award to Karen and to have welcomed Parkinson’s leaders from throughout the country to InMotion and to our event.”

Exercise has long been shown to help people with Parkinson’s manage their symptoms and, since it opened in March of 2015, InMotion has helped people living with Parkinson’s and their families feel better every day. InMotion’s classes are led by a team of more than 30 coaches in boxing, yoga, cycling, tai-chi, and “Better Every Day” Parkinson’s-specific exercises. Healing arts classes, such as dancing, singing, painting and drumming, along with educational lectures and support groups, help create an environment where clients feel nurtured and part of a supportive community.

Every six months InMotion clients can participate in a series of physical assessments that help determine strengths and weaknesses and measure such things as mobility, stability, strength and balance. Clients are then provided an individualized report with recommendations that is updated after each subsequent assessment, based on their progress.

Karen Hess is an InMotion board member.