Merchant of Happiness: Celebrating the end of an era at Big Fun 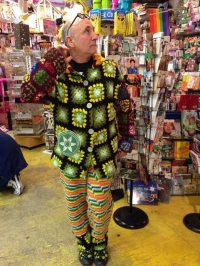 Steve Presser in an outfit "from Afghanistan," created by artist Debbie Apple-Presser, his wife.

“It is difficult when our iconic businesses move on, and we will deeply miss Big Fun, Steve and his staff,” said Suzanne DeGaetano, owner of Mac’s Backs-Books on Coventry. "Big Fun is unique and irreplaceable, and it created important family memories for a whole generation. Its closing is part of the business cycle we will have to adjust to." This sentiment rings from merchant to merchant, as retailers adjust to the idea of a beloved neighbor, Big Fun, closing.

Big Fun opened in 1991, first inhabiting the small building where Jimmy John’s is currently located. That little building had been vacant—actually quite dismal—for years.

“I knew it had to be on Coventry,” reminisced Steve Presser, owner of the beloved time capsule. “I transformed that place into something magical.” With alley lanes from Kinsman-Lee Lanes and card catalogs from the library, Presser’s collecting habits created a sanctuary of small pleasures. “It’s been a vessel—a place where people can make themselves feel better,” Presser said.

That good feeling radiated beyond the footprint of the small shop, moving across the street to 1814 Coventry Road, where everything from whoopee cushions and kazoos to collectibles and art installations piques curiosity and prompts joy.

Customers love Presser’s personable nature and the undying inclusivity of the shop. Fellow merchants love the camaraderie and generosity. Community leaders are grateful for the unflinching support for the district, the city at-large, and the arts.

“Steve has been a wonderful asset to the entire neighborhood—not solely as a merchant,” said Angie Hetrick, executive director of the Coventry Village Special Improvement District (CVSID). “He is a permanent active participant in the community.” And that will not change.

According to Presser, the only thing that is retiring is Big Fun. The man behind that curtain, so to speak, will remain actively engaged with the Coventry district for years to come. It’s what Presser wants; it’s what colleagues know and expect of him. “He will always be a part of the street and this community,” said Hetrick, citing various community projects for which Presser is at the table.

Amid concerns about the district losing an anchor store, Hetrick noted out that the quarter-mile district has more than 10 merchants who have been there for over 25 years. That’s a lot of staying power. “It’s a resilient community with longstanding businesses,” she added, pointing out how many economic crises the nation has faced in those 25 years.

Presser is transparent in discussing the viability of his business model in the era of eBay and Amazon. With rent and other hard costs rising, it became clear that it was time to close the shop. “This whole idea of 'the shopping experience’ is becoming a thing of the past,” Presser reflected.

Presser stressed that if people want to live in communities with charming shopping districts, they need to make sure they are actually making purchases in those shops on a regular basis. Brick-and-mortar business can survive in the Amazon era, said Presser, “but for Big Fun, in Coventry, it was time.”

The hardest part, Presser said, will be the change in daily connection with staff, customers, and neighboring merchants. “It’s been my life for 27 years,” he said.

It’s going to be a big change. The same holds true for Big Fun’s neighbors. Tom Fello, owner of Tommy’s restaurant, shared his sadness, anticipating the absence of the day-to-day visits, banter and camaraderie. “We are so blessed to have Steve as a part of our community," said Fello. "He put his heart and soul into that place, into Coventry.”

Fello described how Presser’s generosity has helped the district knit together over the years, and noted that Presser has always shared the limelight. “Steve has given more than any other merchant I’ve ever known in my 46 years as a merchant in Coventry,” Fello said. “Steve’s draw and appeal to customers cannot be replaced.”

Coventry merchants, CVSID members, and Presser, himself, all express a confidence that this change is part of the natural ebb and flow of retail. Legendary shops do sometimes retire. And all legendary shops also have a beginning. There is optimism that, while the shoes to fill may seem big and clown-like, the good karma of Big Fun will continue when new tenants arrive.

[Editor's note: This article had been updated to expand Suzanne DeGaetano's quote.]

Mostly a mom, Shari Nacson, LISW-S, is a freelance editor, child development specialist, and nonprofit consultant who makes her home in Cleveland Heights. More than anything, Nacson is inspired by kids and adults who build connection through kindness.