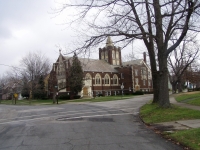 Originally Church of the Cross, a United Methodist congregation, this lovely church in the Caledonia neighborhood was completed in 1926 and became a Cleveland Heights Landmark in 2007.

In the 1990s, it was renamed Community of Living Hope, and in 2009, the Start Right congregation took over this church, which looks like no other in Cleveland Heights.

It is a typical 1920s Tudor Revival edifice, with the expected brick and stucco along with half timbers, but Gothic Revival vocabulary is also seen.

The church’s interior has changed little over the years, and the sanctuary features exposed wooden beams, a choir loft, leaded glass, a pipe organ, and original lighting fixtures.

Ken Goldberg is a member of the Cleveland Heights Landmark Commission, which preserves and protects buildings, works of art and other objects of historical or architectural value to the community. Its seven members are appointed to three-year terms by CH City Council.