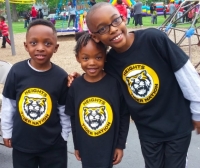 Young participants in 2017's "We Are Noble" event.

Noble Neighbors marked its fourth anniversary with a party at the Victorian Condominiums on Jan. 2. Attendees recounted the year’s activities and accomplishments over a potluck community meal.

The Triangle District, the business district bounded by Warrensville Center, Mayfield and Noble roads, was a focus of attention in 2017. A group of Noble Neighbors joined with FutureHeights to gather data about every business in the area. They surveyed and interviewed every shop-owner and gleaned their perspectives on the district. Nearby vacancies were included in the inventory. This data is being recorded into a database that will serve future planning.

Noble Neighbors and FutureHeights partnered for two events regarding the Triangle District—a charrette and a workshop. The charrette explored potential development on the large city-owned parcels and the vacant lot at the former site of the Center Mayfield Building through a presentation by FutureHeights’ Civic Engagement Committee. The “Envision a New Triangle District” workshop, held later, engaged more than 50 residents and stakeholders to sketch and describe their ideas for the area.

“We Are Noble” was the new name for the neighborhoodwide celebration event in May. Noble Elementary School’s “Noble Fest” and Oxford Elementary School’s carnival were held during the weekend. Noble Neighborhood Library, area businesses and churches, the Home Repair Resource Center and the Martin G. Lentz Police Academy showcased their services, and residents hosted more than 50 garage sales to help attract people to the area. A promotional video was filmed during the weekend with the help of a grant from the FutureHeights mini-grant program. The video is viewable at www.nobleneighbors.com.

Noble Neighbors members sought to participate as an organization in a variety of events in the Cleveland Heights-University Heights community. They gathered a team to compete in the Reaching Heights Spelling Bee and joined a parade on Lee Road celebrating the students in the school district.

Ongoing efforts include being present at Cleveland Heights City Council meetings, expanding public perennial gardens, and "Light Up Noble," which encourages businesses to showcase their locations when viewers of Nela Park’s annual holiday lighting display drive through the neighborhood. A one-time event in the fall whimsically celebrated the repaving of Noble Road.

Looking forward to participating in planning and development of its business districts and residential neighborhoods, Noble Neighbors has launched an effort to further educate its members about the latest thinking and movements in community-building. Participants prepared for the Triangle District activities by viewing TED talk videos, reading articles and studying maps. Members have formed several book groups to study community social structures and patterns, which they will then be able to apply to future projects.

Noble Neighbors looks forward to its growing partnerships with the city of Cleveland Heights, the school district, Heights Libraries and FutureHeights, as it continues its efforts to help the northeastern quadrant of the city thrive.