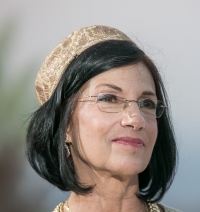 Shulamit Magnus will present a scholar-in-residence program at Beth El - The Heights Synagogue (3246 Desota Ave., at Euclid Heights Blvd.), Feb. 2, 3 and 4. In three sessions, she will address “Who Was a Jew? Views from History on Jewish Boundaries, Boundary Drawing, and Identity.”

Magnus, professor emerita of Jewish Studies and History at Oberlin College, and now teaching at the Hebrew University in Jerusalem, will explore the question of Jewish identity in different periods and places in Jewish history, from antiquity to the present. She will look at why, how, and by whom lines of belonging and exclusion have been drawn, and long periods in Jewish history when no such lines were drawn and the question that is so controversial now was, literally, not a question.

She will also discuss: when and why a formal process of conversion came into Jewish practice; how the Jewish world responded to some very complicated cases of belonging and identity, such as conversos ("Marranos" or secret Jews during the Spanish Inquisition); and people like Benjamin Disraeli (English prime minister who was baptized as a child yet loudly proclaimed Jewishness—of a sort), Sigmund Freud, and a group of "loyal converts" in Tsarist Russia, whom Magnus calls "good-bad Jews,” who used their position as converts to help Jews accused of blood libel; and how conversion and boundary line issues are playing out today in Israel. As Magnus says, “Think it’s messy now? It always was!”

Magnus helped establish the Jewish Studies Program at Oberlin and was its chair. She is a historian who specializes in questions of identity and cultural change in European Jewish societies, the history of Jewish women, and the workings of gender in Jewish society. She is the winner of a National Jewish Book Award and a Hadassah-Brandeis Institute Award for her critical edition of Pauline Wengeroff's Memoirs of a Grandmother; and is the author of several other books and dozens of articles. She is a plaintiff in a case now before the Supreme Court of Israel to enforce the right of Jewish women to read Torah at the Western Wall (Kotel).

Magnus will present three sessions over the weekend: Friday night, Saturday afternoon, and Sunday morning. The cost for the entire weekend, which includes two full meals and a light brunch on Sunday, is $45. Individual sessions are $20. You must register in advance, at www.bethelheights.org or by calling 216-501-2761.

Publisher and graphic designer Joe Buchwald Gelles, a member of Beth El-The Heights Synagogue, has been a Heights resident for 28 years. He is married to Mia Buchwald Gelles, and they have three children: Ruth; 33; Noam, 22; and Shani, 20.