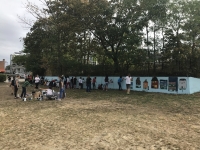 Elementary school students spruced up a vacant lot at Cedar Road and Meadowbrook Boulevard by painting a mural on a concrete retaining wall. Photo by Ranen Reichstein.

Fifth-grade students from Fairfax and Boulevard elementary schools helped beautify the Cedar Lee Business District earlier this fall when they painted a mural on a blank retaining wall at the long-vacant lot at Lee Road and Meadowbrook Boulevard.

At the start of the project, the students first learned about the architectural styles prevalent in Cleveland Heights. They then made their way to the wall, which had been painted a pale blue, creating a canvas upon which they painted their images for the public to view.

The fifth-graders were assisted by the Heights High Art Club's Londyn Crenshaw and Mila Zelic, who designed parts of the mural and spent many hours before and after school working on it.

“This is a great example of place-making, or residents elevating places in their own community,” said Sruti Basu, director of community-building programs at FutureHeights, a community development corporation. “It is an acknowledgment of the artistic integrity of our community.”

Parent volunteers Krissy Dietrich Gallagher and Bill Schubert spearheaded the project to make-over the wall, which they said had been an eyesore.

"I hope this shows the kids that when you see something ugly in your community, you have the power to do something about it," said Dietrich Gallagher.

The students completed the project prior to the 2017 Heights High Homecoming Parade on Oct. 6, which began at Fairfax Elementary School and traveled down Lee Road, past the site of the mural, to the high school at Cedar and Lee roads. The mural provided a colorful backdrop for the parade watch party, which took place in the Lee-Meadowbrook lot.

Ranen Reichstein is a FutureHeights intern and a student at the Mandel School of Applied Social Sciences with a concentration on community practice.