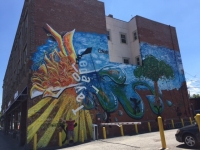 Artist Thomas Conger in front of his mural in the Cedar Taylor Business District. [photo provided by Kevin Smith of CTDA]

Conger completed the mural, on the west façade of the building at the southwest corner of Cedar and Taylor roads, on July 2.

CTDA, a grassroots group of property owners, merchants and residents with the common goal of beautifying and enhancing the neighborhood, selected Conger in fall 2016 from among those who responded to its call for artists.

Over the past few years, CTDA has been implementing streetscape elements, such as planters, benches, bike racks and signs. The group decided to commission artwork to complement its other efforts, further enhancing the physical environment and bringing vibrancy to the area.

CTDA and the FutureHeights Neighborhood Mini-Grants program supported this project.