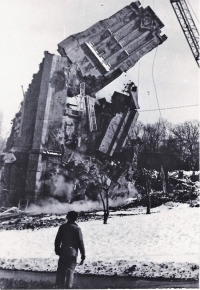 That guy is not me, but in February 1976, I did watch the demolition of the original Coventry School, my alma mater—a bit of a metaphor for my whole education experience.

I don’t know if this is unusual or not these days, but when my class graduated from Heights High, there were at least 15 kids who had been there since we were in kindergarten. And that was just from my kindergarten class at Coventry School. The Cleveland Heights-University Heights system had 11 elementary schools at that time, so there may have been somewhere around 165 “lifers” in the senior class. And there were others, too, who moved into the system in first, second and third grade and then stayed for the whole ride.

So I don’t know if that would be out of the ordinary today. But what I do believe is unusual is that my parents both went through the Heights school system, and my kids did as well. Three generations is a lot, these days. And if plans don’t change, the fourth generation will attend Heights schools, too.

I’m thinking about this because my 50th high school reunion takes place this month. I didn’t go to my 10th reunion. Because I didn’t get invited. After the event, I read the program book and saw that I was on the “unable-to-locate” list. Even though I lived near the corner of Derbyshire and Lee roads, within sight of the school. And even though my parents still lived at the same address they had when I was at Heights, and still had the same phone number. Obviously, the reunion planning committee didn’t try very hard to find me. Though that is understandable, because no one could have been less involved with the class or the school than I. And, in fact, I didn’t actually graduate with my class. Or ever.

I did go to the 20th. (They found me that time. I was then the editor of Cleveland Magazine. They no longer had a good excuse.) The 20th-reunion experience was horrible. Every time you turned around, someone wearing a suit or dress that was much nicer and more expensive than yours, and with great hair, was talking, pretty loudly, about their work as a doctor, or lawyer, or banker. Most seemed a little desperate. It was sort of nightmarish. I said I’d never go to another reunion.

Then, about a year prior to the 30th—by which time I’d developed a reputation as someone who got involved in causes and events, like boards of trustees for small arts organizations, and benefits—I was asked to join the reunion committee. So I did. I thought it might be interesting. It was. I got to go to meetings with a bunch of people I never knew in high school. They were nice. We got along fine. I tried to figure out why I had hated them, and they me, in school. I couldn’t. (Well, except for that one guy.)

The 30th reunion itself was way more enjoyable than the previous one. People were much more relaxed; not trying so hard to impress; talking more about their kids than their careers. Everyone was happy to see everyone else. (Except for that one guy.)

For the 40th, I was not invited to join the planning committee a second time. Maybe during the meetings for the 30th they figured out why they had hated me in high school. But the reunion was great. We all just sat around and talked about life.

One thing that stands out about that reunion was talking to my old friend Steve. I was friends with him throughout junior high and high school. In our class of about 1,000, he had been one of only two African-American kids, and the only male. Plus, he was the tallest kid in the class. He had played on the Heights basketball team. As we were standing and talking, a guy passed by and said, jokingly (I think), “Hey, Steve—you missed that shot in the Euclid game and we lost.”

Steve said to me, “You know, he said that before, but he must have me confused with someone else.” I looked up at him and said, “Steve—I don’t think so.”

I’m not sure what to expect of this upcoming reunion, but looking at the pattern that has formed, I’m expecting to enjoy it.

When my mother attended her 60th Heights High reunion, in 2001, I could hardly believe how old she was (in other words, 10 years older than I am now) or that any of those people could actually remember high school. She said afterward that she enjoyed the reunion, and that they all remembered each other, but that the group was pretty small. She said, “I think the next one will be a conference call.”