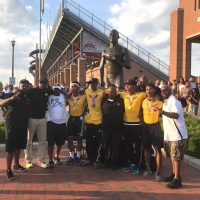 Members of the Heights High boys 4x100 relay team (in yellow, from left) Zaire Webb, Shakorie Davis, Rahmon Davis-Smith and Jakeith James, with their coaching staff, after their state championship win on June 3.

The 4x100 team members ran a 41.68 in the prelims on Friday, June 2, which put them third overall and second in their heat, behind Gahanna Lincoln. The Heights High Tigers came through in the finals on Saturday, running a 41.36 to beat Lincoln High for the title.

Shakorie Davis also made it to the medal stand as an individual, finishing fourth in the state in the boys 200-meter dash. Davis was in sixth place after the prelims, running a 21.72 in the second heat. He then ran a 21.75 race in the finals to finish fourth.

The Heights boys team finished 12th overall at the meet, with 15 points.

Senior Dayvione Briggs competed in the girls 110-meter hurdles. She ran a 14.92 in the prelims, but came up short of qualifying for the finals, despite besting her regional qualifying time.