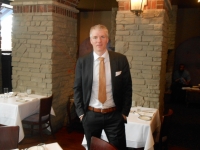 Brandon Chrostowski, the CEO of Edwins restaurant and leadership program.

St. Paul’s Episcopal Church in Cleveland Heights has undertaken a program designed to help support and further the work being done by Edwins Leadership & Restaurant Institute on Shaker Square.

Brandon Chrostowski is the CEO of both Edwins (“education wins”) restaurant and its associated institute; he opened both on Nov. 1, 2013. Prior to that, Chrostowski had worked at L’Albatros in University Circle.

Chrostowski had wanted to [run] a restaurant since he was a teenager. What sets Edwins apart from other traditional restaurants is that it is a nonprofit—one that supports people who have recently been released from prison, teaching them how to work in a restaurant and helping them get jobs.

“In the state of Ohio, there are over 50,000 people serving time in prison,” Chrostowski said. “Over 20,000 are released from prison every year, with over 7,000 returning home to Cuyahoga County. Upon release, these people face societal barriers to successful reentry in gaining access to housing, food, healthcare, employment and transportation.”

Edwins was designed to give formerly incarcerated adults a foundation in the hospitality industry, while providing the support network necessary for successful reentry.

Regarding Edwins relationship with St. Paul’s, Chrostowski said he had known some church members and, several months ago, he began going to the church and giving talks. Eventually, the church formed a committee to help Edwins, and Chrostowski began meeting with the committee, as well as speaking at some forums the church held.

St. Paul’s has established five programs to help Edwins’ program. These include creating a launch fund to meet the graduates’ most typical needs. For example, the church might provide a set of culinary knives, work shoes, uniforms, suitable clothes and transportation passes. The church also wants to provide professional and personal services on an as-needed basis. These might include legal, medical, financial and psychological help, as well as life skills and job-seeking assistance.

In addition, St. Paul’s is also providing space at the church where students can meet with family members. The church also plans to host graduation parties and reunions with graduates, alumni and family members. St. Paul’s also is building a discretionary fund so that Edwins can meet the emergency needs of students.

So far, said David Hartt, head of St. Paul’s Edwins committee, the church has raised more than $7,000 in contributions and pledges.

Correction: An earlier version of this article, published in the May print issue of the Heights Observer, incorrectly referred to Brandon Chrostowski as “owner” of Edwins. Both Edwins restaurant and its education arm are nonprofit, so have no owner. We thank Matt Fieldman, a member of the Edwins board of directors, for pointing out this error.