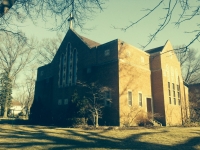 Peace Lutheran Church will be located at 3740 Mayfield Road.

The members of Bethlehem and Hope Lutheran churches are swiftly moving ahead on their decision to consolidate ministries. In early April, during one of their monthly joint worship services, the congregations voted on the new name of the consolidated church, to be located in the current Bethlehem Lutheran Church building, at 3740 Mayfield Road—Peace Lutheran Church.

Congregants selected this name after several votes were taken on the 80 names that had been nominated.

Various ad hoc committees are hard at work to consolidate the two ministries—each with 100-plus years of service—into one. A personnel committee is looking at upcoming staffing needs; a worship committee is reviewing various worship styles and the sense of space; an elevator committee is examining the best location for an elevator, to make the building fully accessible; and a memorial garden committee is using the services of master gardeners to begin work on a welcoming, walkable outdoor garden.

The Hope Lutheran building has been for sale since early February, and the congregation is currently weighing the top bids. Representatives of more than 25 assorted ministries were given personal tours throughout the building over the course of two months; every group that inquired about the building represented a local Christian congregation. While the final decision on the purchaser has not been made, each of the finalist bids already hosts an active, community-based ministry in its current location. The congregation feels each would be an asset to the North Taylor neighborhood.

Donald King is pastor of Hope Lutheran Church on North Taylor Road, and an active participant in the Heights InterFaith Community. He has served at Hope since 1999, and has lived in Cleveland Heights since 1985.