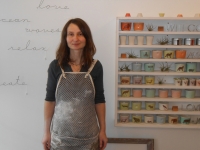 In December, Asya Palotova, a designer and ceramist, opened a unique new store and studio at 2114 South Taylor Road in Cleveland Heights.

Palotova’s products are available in stores in 16 states, and online, and have been featured in Better Homes and Gardens, Southern Living, House Beautiful, Food & Wine, Bon Appetit, InStyle and Martha Stewart Weddings, among other magazines.

“Gleena” is a Russian word for clay, and Palatova makes all of her items from porcelain—a clay-based material—in her Taylor Road studio. Prices range from $20 to around $300 for some vases.

Palatova was born in St. Petersburg, Russia, and lived there until she was 11. Her family moved to Kansas City, and then Lyndhurst, when Palatova’s father got a job in Cleveland. Palatova graduated from Brush High School, and then earned a degree in graphic design at the University of Cincinnati.

After working as a graphic designer in New York City, Palatova earned a master of fine arts degree, with a concentration in ceramics, from the Rhode Island School of Design. She started Gleena Ceramics in 2002, and moved back to Cleveland in November to open her store and studio.

“I always wanted a store,” she said. “And it seemed like the right time, and I really like this neighborhood.”

Palatova, who lives near Fairmount Boulevard in Cleveland Heights, said she loves the beautiful architecture in the Heights. “I love the historical quality of the houses here,” she said. “There are also so many great restaurants and coffee shops and galleries here. But it’s mostly the architectural quality of the neighborhoods and the history behind it all that I really love.”

Nature has always been an inspiration for her work, and she said she also likes the wooded areas in the Heights. “I like walking in the woods, or going to a beach,” she said.

She added that she is very happy to finally have a store, and that business has been good so far.