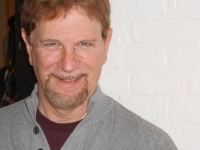 Rick Karges, author of a book about growing up in Cleveland Heights.

In The South Overlook Gang, Rick Karges, who grew up in Cleveland Heights, tells the story of his childhood here, in the 1950s and ‘60s.

The South Overlook Gang is Karges’ first book. He decided to write it after thinking about how wonderful that era was, and how different it is from today’s world. The book’s title comes from the name of a group of kids that Karges hung out with until he went to college.

He’ll be signing copies of his book at Nighttown on Sunday, March 12, 2–4 p.m., in an event presented by Appletree Books.

Karges, 67, was born in Cleveland and moved to South Overlook Road when he was 5. “For many years I have thought about how great it was to grow up in that neighborhood,” he said. “The families were all very close, and it was a very special time.”

“As I began to put together old stories, I reached out to old neighbors,” Karges said. “They shared the same affinity for that time. And it was a very different time. Today, kids are inside using their electronic equipment. You don’t see kids outside playing with each other anymore. And back then, our parents would be outside talking to the neighbors.”

Karges characterized his childhood as “a very special kind of magical time.” He said that, back then, everyone developed “friendships and relationships that were strong bonds.” Many of the mothers did not work back in that time. Instead, they would raise their children. “They would network and socialize with their neighbors,” Karges said. “Now people don’t know who their neighbors are.”

Karges has not lived in Cleveland Height since he left for college in 1968. Yet he stills loves how great the neighborhood was back then. But, he said, it has changed a lot since those days. “I recently went to a garage sale on South Overlook,” he said. “And nobody was there. It was like a ghost town. But it’s just a different time.”

Karges earned both a bachelor’s and master’s degree in social work from The Ohio State University, and is currently executive director and CEO of Hopewell: A Therapeutic Farm Community, located in Mesopotamia, Ohio. It is one of only five such mental-health centers in the United States.

“We treat people who are seriously mentally ill,” Karges said. “We look at their mind, body and spirit as a way of addressing their illness. And many of the residents work on the farm.” Karges has been at Hopewell for nine and a half years. Prior to that, he ran a mental-health organization in Maine for about nine years.

Karges currently lives in Middlefield, Ohio, in Geauga County. He has been married to his current wife, Megan, for 16 years. It is his second marriage, and he is the father of three children, Matthew, 42; Julie, 40; and Ricky, 12; and grandfather of four.

His book is available at Appletree books and other local bookstores, as well as online.