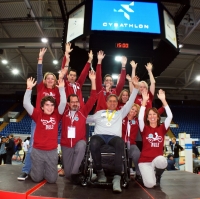 Team Cleveland celebrating their win in the Cybathlon. Mark Munh (in the white shirt, center) won the race. Ronald Triolo is just left of him. Photo by Dr. Paul Marasco.

Cleveland Heights resident Ronald Triolo has spent much of his life trying to help people regain their ability to move around and walk. Triolo, 58, is executive director of the Advanced Platform Technology (APT) Center at the Department of Veterans Affairs (VA). He is also a professor of orthopaedics and biomedical engineering at Case Western Reserve University (CWRU).

The APT Center is a national center for the development of all kinds of devices, primarily for disabled military veterans. Its employees focus onprosthetics and orthotics, neural interfacing (which involves technology for recording from the brain or nerves and injecting into the nervous system), wireless health monitoring and maintenance, and emerging enabling technologies.

Triolo and his co-workers have developed numerous medical devices to help people who have sensorimotor impairment or limb loss.

Last fall, Triolo took part in the Cybathlon—a “bionic Olympics” which comprises six athletic events for people with disabilities "using advanced assistive devices including robotic technologies." Triolo is the leader of Team Cleveland, which won the Cybathlon bicycle race in Switzerland last October. Team Cleveland held a practice race at the Heights Recreation Center in July, and the winner in Switzerland was Mark Munh. (Though a resident of California, Munh represented Team Cleveland, as he had enrolled in Triolo's research program at the APT Center.)

Triolo’s work at the center played a major role at the Cybathlon. "I'd say it was the key to our success," said Triolo. "It set us apart from the other 10 teams since we were the only one to use implantable neural stimulation technology." The next Cybathlon will take place in 2020. Team Cleveland is looking into hosting a preparatory/demonstration event in Cleveland sometime in 2019.

The APT Center is a partnership between the VA and CWRU. “It’s a really powerful combination,” Triolo said. “It creates opportunities for clinicians and scientists to get together so they can address real-world problems. And it’s one of only 13 centers for rehabilitation, research and development in this country.”

“I try to solve anything that affects [the] ability to stand and walk,” he said. “I focus on four main areas: people who are paralyzed by an injury, stroke or muscular dystrophy; controlling balance so people can stand longer and not worry about falling; seated functions for people in wheel chairs, and amputees.”

Triolo grew up near Philadelphia. He earned a bachelor’s degree from Villanova University in 1980, then earned two masters of science degrees, in biomedical and electrical engineering, at Drexel University. After earning his doctorate degree in biomedical engineering from Drexel, he got some post-doctorate training at CWRU. From 1986 to 1994, he was director of research at the Shriners Hospital in Philadelphia.

Triolo said he loves the energy and diversity of Cleveland Heights. “Orchestra members, physicians and people from all walks of life live on the same block,” he said.