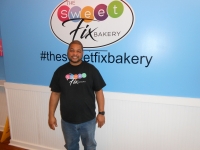 Robert and Allison Craig are the co-owners, along with Eric Rogers, of Sweet Fix Bakery, at the corner of Lee and Silsby roads. The bakery occupies the space that previously housed Rogers’ restaurant, Black Box Fix, which moved to 2195 Lee Road and is now called the Fix Bistro.

Rogers originally intended to open Sweet Fix Bakery himself, but changed his plan when Robert Craig, Rogers' wife's cousin, expressed an interest in opening a bakery.

"I gave him and his wife the opportunity to run their business full time under our Fix brand as a blessing to them," Rogers said.

Rogers currently owns 50 percent of the bakery, while the Craigs own the other 50 percent. Rogers holds the lease on the space where the bakery is located.

The Craigs took over the space in August 2016 and renovated it, opening the bakery in October of last year.

This is the first storefront bakery that the Craigs have owned, but Robert, 54, has been baking for many years. He started out by making sweet-potato pies for family and friends.

Robert worked in the pharmaceutical business for about 20 years. When the company he was working for closed, it offered him the chance to go to college, with the company covering the cost.

He attended Cuyahoga Community College, where he earned a degree in its baking certification program. He now does most of the baking for Sweet Fix, while Allison takes care of more behind-the-scenes projects.

Prior to opening Sweet Fix, the Craigs, who live in Woodmere, had a licensed home bakery called Craig’s Divine Desserts.

The Craigs said they love the neighborhood where the bakery is located. “I love all of the people who live around here,” said Allison. “They are very friendly, and they frequently come by and say hello to us.”

Among the bakery’s most popular items are red-velvet cupcakes and German-chocolate cupcakes, and the yum-yum cake, which contains bananas, pineapple and pecans. “A lot of people like it,” said Allison.