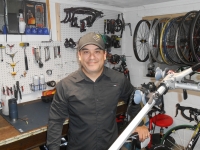 Brandon Hirokawa in his shop in the basement of his house in Cleveland Heights.

Brandon Hirokawa first became interested in bicycles in 1987, when he was living in New Orleans, where he was born and raised. “I was a national-class swimmer, but everyone was growing over 6 feet tall,” he said. “I stayed at 5 feet 6 inches tall, and I had to find a new sport.”

One of his father’s friends raced bikes, and he suggested that Brandon give that a try. He liked biking, and now, almost three decades later, he is the owner of Hirobel LLC, a company that produces frame clamps that bike shops can use in repairing aero carbon-fiber bicycles.

Hirokawa, who’s 43 and lives in Cleveland Heights, explained that carbon-fiber bikes now make up more than 20 percent of the bike market. While most bikes are made of alloy or metal, the carbon-fiber bikes are lighter in weight. “They are made of carbon, which is similar to fiberglass, and they wind up being very light,” explained Hirokawa. However, they can also be damaged when they are being repaired.

Hirokawa learned about the possible damage in 2005, when he was visiting his family in Denver. While at a bicycle shop in Parker, Colo., he watched a mechanic work on an aero carbon-fiber bicycle. The mechanic had no way to secure the bicycle to the stand. Discussions with mechanics in many other shops revealed similar frustrations, and Hirokawa began exploring new ways to work on carbon-fiber bicycles without the possibility of damage.

A viable product started to come together in early 2013, when Brandon shared his frustration and ideas with Marc Bellett, a friend who is also an avid cyclist. Bellet, who lives in South Euclid, is a designer and co-founder of Hirobel.

Hirokawa and Bellet founded the company in 2014, and started selling their clamps in 2015. “There’s no other product in the world that can prevent damage to carbon bicycles,” Hirokawa said. “Ours is the only product that prevents mechanical compression and compression damage.”

Hirokawa moved to the Cleveland area in 2010, when he was first looking for a place to start his company. “I went to 11 different cities to try and decide where we should go to start the company,” he said. “And I was really impressed with Cleveland. Everything from the manufacturing capabilities to the cost of living was great.”

In addition to running his company, Hirokawa also takes part in many biking activities in the Heights area. “I am involved in the Coventry Bike Tune-Up every year,” he said. “It usually takes place in early June, and I am always there to help repair bikes.” He also is involved in projects put together by the Heights Bicycle Coalition and Bike Cleveland.

Hirokawa, who lives off of Monticello Road in the northern section of Cleveland Heights, is married to Elizabeth Habat. He and his wife have a daughter, Ellie, who is 16 months old.

In January 2016, Ellie was diagnosed with leukemia. She is now in remission, and her health is better. Because of Ellie’s illness, Hirokawa helps out with the Velosano Cancer Ride that benefits cancer research funding at Cleveland Clinic. “Community involvement is very important for me and my team,” said Hirokawa. “Being a part of the community is just as important as being a successful company.”