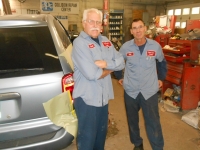 Cedar-Taylor Garage & Autobody, located just south of the intersection of Cedar and Taylor roads in University Heights, closed on Oct. 28. The car repair shop had been in business at that location since 1938.

The garage’s most recent owners were Bill Tammarino and Mark Stanos, who bought the shop in 1986. Al Kus was the original owner of the business, and Bill Decapite was its second owner.

Tammarino, 61, said he and Stanos decided to close the shop because the auto-repair business has “changed a lot in the last 30 years.”

“It’s a business for younger people,” said Stanos, 69. “It’s so physically demanding, and I refuse to keep doing this when I am in my 70s.”

“You are constantly bending and constantly stooping,” added Tammarino. “You have to get under the cars, and you are twisting bolts that won’t come loose.”

The two partners first met when they were working at Qua Buick in Shaker Heights. Stanos worked at the dealership for 22 years, and Tammarino worked there for 14. When the Cedar-Taylor Garage became available, they decided to buy it.

Both men praised their customers, many of whom had been coming to the shop since Tammarino and Stanos first took it over.

“We are primarily a small, neighborhood shop, but we have been servicing a lot of loyal customers for 30 years, and that’s what has kept us in business for so long,” said Stanos.

Both Stanos and Tammarino said they love the Cleveland Heights and University Heights communities. “I think we have made a real dent in the community,” Stanos said, pointing out that the business supported the sports programs at Cleveland Heights High School for many years, and also donated money to the Knights of Columbus.