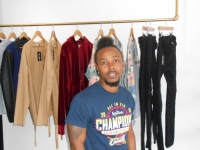 Over the past year or so, several new stores have opened near the intersection of Mayfield Road and Lee Road in Cleveland Heights. Though that area along the south side of Mayfield Road has never been a major commercial district in the city, it may be turning into one. Among the businesses are clothing stores, hair salons, barber shops and manicurists.

Coco Merci, which opened in January 2016, is located at 1623 Lee Road. The store carries both men’s and women’s clothing. “We pretty much carry upscale items, for a party or a special event,” said Thomas Von Bolden, who runs the store, which is owned by his sister, Tamia Bolden, a medical consultant.

“We really want people to get a different perspective on clothing, and we have clothing so that people can get a different kind of view,” Von Bolden said. “We know how to make sure that our customers’ attire is different and bold, and we really want them to embrace the modernity of evolving fashion.”

Barcode Beautique, at 1645 Lee Road, opened in July 2015, and offers clothing for women, in sizes small to 3X. “We are really for working women," said Tia Thomas, who owns the store. “We have clothes they can wear to work and then wear out afterward.” Barcode also carries gowns for special events; accessories, including purses and jewelry; and support garments, such as specialty bras. The store also provides alterations for its customers.

“Our first year has been abundantly successful,” Thomas said. “We have connected with other like-minded business owners in this area, and we have built great relations with our customers.”

Nearby, at 3104 Mayfield Road, is Blanc Boutique, which carries chic women’s apparel, jewelry, candles, cosmetics, bath and body products, as well as other items. It opened in January 2013.

In addition to the retail stores, Naturally Gifted Fitness center is also in this area, at 1635 Lee Road. It has been there since March 2013, and it is now considering an expansion.

The space at the corner of Mayfield and Lee roads, formerly occupied by Greenwald Antiques, remains empty. The antique shop had been located there for more than 50 years, until 2012, when the owners decided to open a store in Woodmere Village, and then another in Beachwood, and close their Cleveland Heights location.