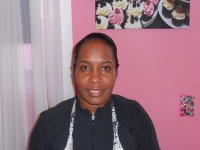 On Oct. 29, Simply Michele’s Cookies & Cupcake Boutique opened at 2265 Lee Road, in the space previously occupied by Shawn Paul Salon (which moved to larger quarters in the Heights Rockefeller Building). The Cleveland Heights bakery is the latest location in a chain of three; the other two are in Garfield Heights and Warrensville Heights.

Simply Michele’s sells cupcakes and cookies, as well as ice-cream sandwiches and other products made from vanilla, chocolate and strawberry ice cream. In the summer, it will sell milkshakes as well. The bakery also offers Garrett’s Popcorn, made in Chicago, and assorted pastries, cheesecakes and mini-cakes, and custom cakes that are made-to-order.

Owner Stacey Michele Stoudemire, 43, bestowed her middle name on her bakeries. She grew up in Cleveland and moved to Cleveland Heights with her family when she was 16. Stoudemire graduated from Heights High in 1990.

Stoudemire started cooking when she was a young child. “My grandmother taught me how to cook,” she said. “I also would watch Julia Child on PBS. So I have been cooking for most of my life.”

In February 1998, Stoudemire started Simply Elegant Catering. “We do catering for a lot of nonprofit organizations, and we also do corporate catering,” she said.

In 2007, at age 34, Stoudemire had a heart attack. Many other members of her family had also had heart attacks, and that prompted her to change the food she made, especially for Simply Elegant. “I adjusted to a heart-healthy menu,” she said. “I got rid of pork, sodium, salt and a lot of processed foods.”

On Dec. 18, 2014, she opened the first Simply Michele’s in Garfield Heights. “It really came out of my catering business,” she said. “I had started making cupcakes, and I thought it would be great to have a place that sold the cookies and cupcakes.”

She decided to open a shop in Cleveland Heights because “there were no stores [in the city] that specialized in cupcakes or cookies,” explained Stoudemire.

While her first two bake shops opened on the same December date, Stoudemire said that she “didn’t want to wait until December to open the Cleveland Heights store.”

Over the years, Stoudemire has won many awards for her cooking. In 2015, she won a City of Cleveland Black History Month Award for her work, and in 2014, she won a Garfield Heights Distinguished New Business Award.