Cleveland Cuts sets up shop in the Rockefeller Building 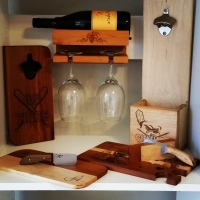 Growing up with a dad who owned a salvage yard, and with a large farm in the family, Dee Coker was repairing or making metal items from an early age. He learned to repair parts by straightening them or to forge new ones when necessary. Those early skills led him to an interest in making knives.

About a year and a half ago, Coker forged a new partnership with his personal trainer, Al Stokes Sr. They already had another close bond; Coker is Stokes’ pastor. The two knew they could work well together and compliment each other. At first Coker made the knives and Stokes made the wooden items they sold: cutting boards, the knife handles, rolling carts. They now each do both the metal and woodwork; Stokes handles the custom etching.

The pair began selling their wares on Etsy and locally at spots such as the Cleveland Flea. Then the opportunity arose to open a brick-and-mortar store in the iconic Rockefeller Building at Lee and Mayfield roads. By mid-August, the two had outfitted a calm, light-filled space at 2495 Lee Road, called Cleveland Cuts. There, they offer a selection of their knives, cutting boards, and the rolling carts and tables they also create. They carry a few additional items to complement their stock, including aprons and knife rolls, and they expect to include some locally produced, shelf stable food items, which will enable them to craft customized gift packages.

A Cleveland Cuts knife begins as a strip of high carbon steel from Admiral Steel in Alsip, Ill. It is shaped by the process called stock removal, in which unneeded areas are eliminated by grinding. Once the blade is in the desired shape, the piece is sent to Kowalski Heat Treating, on Detroit Avenue in the Detroit Shoreway neighborhood, to be hardened and tempered. These two treatments given the blade strength, and also keep the steel from being brittle. The blade comes back to the shop where it is fitted with its own completely unique handle, made from a variety of woods, and even antler. Once a customer picks a knife, it is then sharpened. Cleveland Cuts only sharpens using a whetstone, never a grinder. To further personalize the knife, the customer can have it etched with the owner’s name or a personal symbol.

Coker and Stokes are happy to make custom orders. A knife is such a personal and long-lasting item that some want specific lengths, handles etc. In addition, they offer knife sharpening and etching for customer’s existing knives.

The store is open Wednesday, Friday and Saturday, 10 a.m. to 3 p.m., and by appointment. The pair is happy to interrupt their time making knives and wooden items to meet with customers and talk about their individual needs.

Melissa McClelland is a photo stylist and contributor to Edible Cleveland. She lives in Cleveland Heights with her husband, Len Mastri, a retired commercial photographer.