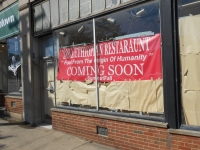 The exterior of Zoma Ethiopian Restaurant.

A new restaurant specializing in Ethiopian food is due to open this fall in Cleveland Heights. Zoma Ethiopian Restaurant will be located at 2242 Lee Road, between Mama Joyce’s Soul Food Café and Heights Uptown Barbershop. Co-owner Zeleke Belete said he is working toward, and hoping for, an opening sometime in late October or early November.

The restaurant will be only the second Ethiopian restaurant in all of Greater Cleveland. The other one, Empress Taytu, is located at 6125 St. Clair Ave.

Belete and his wife, Betty Kassa, are the owners of Zoma. Belete, 34, was born in Ethiopia, as was Kassa. He moved to the United States in 2004 with his brother, who had received a scholarship to attend Cleveland State University. Kassa moved to Cleveland, where she met Belete, in 2010. The couple married in 2014, and have a son, Noel, who is 2 1/2 years old. They live in Shaker Heights.

Belete, who has never worked in a restaurant before, has always loved Ethiopian food and thought it would be a great idea to open an Ethiopian restaurant in Cleveland. Initially, he looked for potential spaces in Ohio City, Tremont and Lakewood. He ultimately chose Cleveland Heights as the location for his restaurant because he thought it was “the best spot, compared to what else was available.”

“There’s a lot of foot traffic in this area, and there are a lot of other restaurants, so I thought it would be a great space,” Belete said.

Ethiopian food typically consists of spicy meat dishes or vegetables served on sourdough flatbread called "injera." Belete explained that most Ethiopians eat their food by hand, although Zoma will offer forks, spoons and knives for those who need or want them.

Belete said his restaurant will offer many vegetarian options, as well as fish, lamb, beef and chicken dishes. Most of the dishes are served as stews. “They include spices from back home,” Belete said. “In addition, there will be no artificial flavorings, and the flatbread is gluten-free.”

Belete said his plan is for the restaurant to be open seven days a week, from 11:30 a.m. to 11 p.m. Lunches will cost around $14, and dinners will cost slightly more.

Zoma will seat about 49 people, and half of the restaurant will feature traditional Ethiopian seating, at grass-basket tables.

The restaurant will also offer a traditional coffee ceremony, in which coffee is made from scratch, with green coffee beans that are washed and roasted. Coffee is a large part of Ethiopian culture and cuisine, and the coffee ceremony generally takes place after each meal.