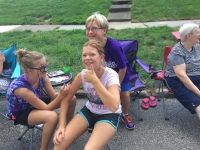 Kids at the block party have fun with face paints.

Block parties have long been a way for neighbors to connect with one another over food and conversation—and what kid doesn’t love a chance to play or ride a bike in the street without getting yelled at? In late August, Edgerton Road neighbors between Washington Boulevard and Silsby Road in University Heights convened a block party and, in doing so, took this traditional form of community engagement to a new level, drawing adults, kids and guests from not only that stretch of Edgerton, but also from surrounding blocks.

“We’ve always had an inclusive approach,” said Jackie Gould, the driving force behind the Edgerton block party since it became a regular event in the early 2000s. “If one of the residents on Edgerton wanted to invite someone from one of the nearby streets, they were welcome to do so.” Traditional methods of promoting the event included flyers left in mailboxes and word-of-mouth.

The planning team thought perhaps the door-to-door flyer drop wasn’t enough. “Some years we’d see neighbors home on the day of the block party, though they weren’t attending,” said Gould. “We’d wonder, did they not know about it?”

Enter social media. Josh Hunter, a planning-team member for this year’s block party, figured he would add to the team’s communication effort by posting the event on Nextdoor, an app that lets neighbors share information online via closed communities. When Hunter posted a reminder on Nextdoor two days before the block party, the number of RSVPs surged.

Attendance nearly doubled at this year’s block party, with additional neighbors from the surrounding streets joining in because they’d heard about it online.

On Aug. 27, police barricades closed Edgerton between Bushnell and Westwood roads. Residents brought chairs and side dishes to share. The planners provided pizza, cake, and supplies for face painting. Close to 50 people showed up and, for four hours, the streetscape was transformed.

Kids rode bikes, created chalk art, painted one another’s faces, and played ball in the safety of the closed-off street. Patrolman Ben Feltoon from the University Heights Police Department brought his cruiser to the party, letting young residents check out the interior and turn on the flashers.

A highlight of this year’s event was live music, courtesy of resident Neil Gould and his longtime jamming partner, Dave Franduto. The duo played an eclectic mix of tunes on acoustic guitars.

The camaraderie of these neighborhood events appeals to many residents, including new homeowner Catherine Sluss. “Growing up in a very close-knit community, I was beyond thrilled to be included in a tradition that had been near and dear to my heart. As the newest residents on Edgerton, Joey and I feel very lucky to be a part of this warm and welcoming neighborhood.”

Interested in planning a block party for your part of University Heights? Contact UH City Hall for information on how to get permission and barricades to close off a section of your street.

Nextdoor is a free app you can download to your Apple or Android phones. New members must verify their identities and addresses before they are allowed to join a specific community and participate in its forums.

Anne O'Shaughnessy is a communications advisor at the Federal Reserve Bank of Cleveland. She and her husband moved to University Heights in 2015.