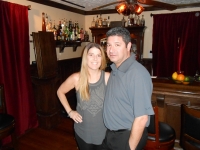 Dawn and Alex Quintana inside their speakeasy.

A year ago this month, Quintana’s Barber & Dream Spa opened Quintana’s Speakeasy at 2200 South Taylor Road in Cleveland Heights. Quintana’s became the first barbershop in the state of Ohio to have its own liquor license.

According to Alex and Dawn Quintana, owners of the barbershop, spa and speakeasy, they got the idea to open a speakeasy after a trip Dawn took about five years ago. “I went to New York with some girlfriends of mine,” Dawn said. “I stumbled upon a barbershop/speakeasy called the Blind Barber in Manhattan. That’s when I got the idea, and it stayed in the back of my mind.”

The Quintanas opened their Dream Spa 15 years ago. It offers manicures, pedicures, facials, massage therapy, body massages and many other treatments. The spa was originally located in the Cedar Fairmount neighborhood of Cleveland Heights, above the Mad Greek restaurant. In 2003, they opened a barbershop on South Taylor Road, and in 2009, they merged the two businesses, operating both of them at the South Taylor location.

The Quintanas purchased the building next door, 2190 South Taylor Road, in December 2014 and moved the spa, which had been on the second floor of the original building, into the new building. One day, they hosted a party for a groom and his friends. “They had brought some snacks and refreshments, and they were hanging out on the second floor, where the spa used to be,” said Alex. “So we thought we should take advantage of the empty space and see if we could get a liquor license. Eventually, it all came to fruition.”

“Originally, we thought it would just be for our customers,” Dawn said. “But now we think it’s a great place that everyone should know about.” The Speakeasy presents music every Thursday night during the summer, and also hosts a speaker series every month. On Wednesday, Sept. 7, Rick Porello, chief of the Lyndhurst Police Department, will talk about the history of the Cleveland Mafia. The venue also hosts regular liquor tastings.

The Speakeasy’s menu is different from that of most other bars in this area, consisting entirely of drinks from the Prohibition era, dating back to the 1920s. In addition to drinks, the Speakeasy also offers a charcuterie board that features cured meats, artisanal cheese, bread and condiments.