On the Rise expands seating, kitchen and menu 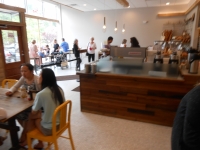 The interior of the expanded On the Rise.

On the Rise, on Fairmount Boulevard in Cleveland Heights, has undergone an expansion to double its size, expand its menu, and offer much-needed seating to customers.

On the Rise originally opened in December 2001. It was strictly a bakery until four years ago, when it added sandwiches to the menu. They became very popular with On the Rise's customers, but created seating problems for those who weren’t taking the sandwiches to go.

"When it was summer, people could sit outside on the patio," said Adam Gidlow, who owns On the Rise with his wife, Jennifer Gidlow. "But in the winter we simply did not have many seats inside, and people had nowhere to sit."

When Fairmount Letters, the stationery shop that was next door to On the Rise, closed about two and a half years ago, Gidlow saw that as an opportunity to solve the seating problem. He could expand both the bakery’s size and menu.

The new expansion more than doubles the number of seats inside On the Rise. The bakery also increased the size of its kitchen, enabling the chef, Brian Evans, to expand the prepared food offerings.

“We now serve a lot more hot sandwiches,” said Evans, 30, who has been the chef at On the Rise for six years. “We also are bringing in a lot more local produce, and we can make many more kinds of salads.”

Evans cited a smoked brisket sandwich and a classic French croque-monsieur sandwich as two of his favorite new items. In addition to the new sandwiches and salads, Evans said that On the Rise plans to start serving more breakfast items, such as eggs Benedict and French toast, on weekends.

The bakery has also installed new espresso machines, and hired a new barista, Meghan Ault. As a result, On the Rise will soon be offering a variety of espresso coffees.

Gidlow, 45, grew up in St. Louis. He majored in environmental studies and psychology at St. Lawrence University, and worked at various bakeries around the country after he graduated. “I was always interested in some form of culinary arts,” he said

While in college, Gidlow met Jennifer Demian, the woman who would become his wife. She was from Cleveland, and, in 1997, they married. About three years later, they decided to move back to her hometown, and then decided to open a bakery. The result was On the Rise.