by Lynn B. Johnson 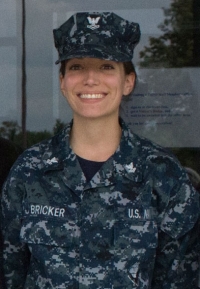 Navy Reserve Medic Cathan Bricker in uniform as she works with the Air National Guard Public Affairs Team for a joint services operation in western Kentucky.

Some people spend their summer vacation poolside, at theme parks, or on the beach.

Not Cathan Bricker. She spent hers helping to fulfill the medical, dental, and eye-care needs of more than 4,000 residents of western Kentucky.

Bricker is a confidential administrative assistant of communications for the Cleveland Heights-University Heights City School District. In 2010 she enlisted in the U.S. Navy Reserve and, since completing boot camp in 2011, she has spent one weekend a month and two weeks a year with her Akron-based detachment.

In summer 2015, Bricker took part in a war-games training, where people pretended to have injuries related to battle.

The program was a partnership between the U.S. Department of Defense and the Delta Regional Authority, with care provided by members of the U.S. Navy Reserve and the Air National Guard.

“Anyone could come for free medical, dental or vision care,” Bricker said. “People lined up at 5:30 or 6 a.m. just to secure their spot for the day. We even ground eyeglasses for patients—all for no charge!”

The chief of public health from the Kentucky Air National Guard’s 123rd Medical Group even conducted a seminar on pet safety. Other personnel served as translators and photographers for the Innovative Readiness Training.

Although Bricker trained as a dental technician for the Navy Reserve, she had the opportunity to put her considerable communications experience to the test during the two weeks.

In all, the clinics provided more than 13,000 medical, dental and optometry services during the field exercise.

“The goal was to train us for a medical mission, which they certainly did,” Bricker said. “The bonus was that real people got real care. I got really lucky to be able to be a part of it. It was a win for everyone.”

Lynn B. Johnson is the director of marketing and communications for The Music Settlement.