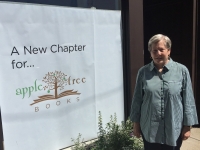 Appletree Books owner Lynn Quintrell outside of the storefront that will house the expanded bookstore.

Appletree Books will soon nearly double in size. The bookstore, located at 12419 Cedar Road in the Cedar Fairmount Business District of Cleveland Heights, is taking over the adjacent space formerly occupied by Sundaez Tanning. Renovations began in June, and the plan is for the expanded Appletree space to open in October.

Lynn Quintrell, the owner of Appletree, said that the children’s section of the old store was much too small. “We’re the only store in Cleveland Heights that sells brand-new children’s books, along with puzzles and other items for children,” she said. “And it was really cramped, so I thought I would add some space if any became available.”

When the Four and Twenty Mercantile store closed earlier this year, Quintrell decided that space was too large. But she sent a note to her landlord, saying, “Should the space next door to us become available, I would like the right of first refusal.” Then, in January, she got a letter saying that the tanning salon was closing. “It all happened sooner than I imagined,” she said. “And Sundaez had been there for 25 years!”

Quintrell said that Mike Occhionero, the landlord, has been very generous. “He came up with a really nice arrangement, and he made it possible for me to take over the space,” she said. “So I signed a deal in June, and demolition began.”

Appletree has been in the same space for 41 years. Quintrell bought the store in 2014 with Alice Webster, who left the business in 2015.

“It’s really a great piece of the community,” said Quintrell. “Even though a lot of bookstores are not doing that well, people come in here and want to talk about the books and see them. They like being part of the community. We try to be an active, vital participant in the community, and the community supports us in return.”

In addition to accommodating a new children’s section, which will be twice as large as the current one, the new space will also comprise a separate young-adult section, with books for those 14 and older, and a section of lifestyle books for adults, including books about cooking, gardening, fashion, style and crafts.

There will also be a dedicated space for special events, including author readings and talks. In the original space, Quintrell explained, Appletree was unable to host book readings because there was nowhere for people to sit.

The space in the original store where the children’s section used to be will now feature greeting cards, wrapping paper, calendars, note cards and other stationery items.

Quintrell noted that the furniture and details in the new space will be eclectic, and some of the bookcases originally belonged to her great-grandfather.

Quintrell expressed her appreciation for all the work that has been done to renovate the current store and to incorporate the new space. In particular, she thanked Turk Construction; Katie Tumino of Reflections Interior Design; Jim Silvestro, the painter; Dan Groth, the carpenter; and Rich Bozic of Blatchford Architects, who came up with the plans.