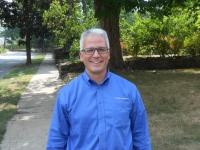 Lou Radivoyevitch was born and raised in Cleveland Heights. He returned to his hometown in 2000 and has lived here ever since. Even so, he felt that there was a lot more he needed to learn about the city. So, last year, after becoming a member of the Cleveland Heights Master Plan Steering Committee, he decided that he would walk down every street in the city, to gain more knowledge about Cleveland Heights and its needs.

“At the first meeting of our master plan committee, the city gave out big maps to everyone that was there,” he said, “and I realized that what I knew about Cleveland Heights was limited to the areas where I had lived. There were a lot of areas in Cleveland Heights that I had no idea about.”

Radivoyevitch began his walking program on Labor Day of last year, and he finished it this past July 24. “I did a good 50-plus miles in July,” he said.

He added that the walking program was good on two levels. “It’s good for your health,” he said, “and it’s a good way to really see the city. You can’t do that by driving in a car.” In terms of how the walking helped him in his role on the committee, he said that it made him able to ask better questions. He added that the walks also gave him “a better feel for what the groups are trying to accomplish here.” Among the things he saw that he liked were the community gardens in various parts of the city. He also likes the plan to start a farmer’s market at Roanoke and Noble roads.

One of the things that surprised him was the number of postwar ranch houses in the city. “I grew up in a pre-1925 home,” he said, “and I thought that most houses in Cleveland Heights were from that era, but it turns out there are also a lot of newer homes here.”

When he was growing up, Radivoyevitch went to school at Coventry Elementary, Roxboro Junior High and Heights High schools. He then studied at Case Western Reserve University before getting his degree in urban studies at Cleveland State University. He lived in Lakewood for five years before returning to Cleveland Heights in 2000. He now lives on Dartmoor Road, and he and his wife, Liz, have two sons, Alec, 21, and Eric, 18.

In addition to his work on the master plan, Radivoyevitch is one of the owners of RAD Graphics Inc. “My wife started the company back in 1999,” he said. “We help businesses execute their marketing strategies, and we do a lot of graphic design.” RAD’s marketing services include print, direct mail, e-mail marketing and promotional products.

Radivoyevitch said that, besides housing, other important elements in neighborhoods are elementary schools, parks, green space and being able to walk to a local restaurant. When he went into different neighborhoods, he would ask himself questions like, “If I lived here, where would I walk? Would there be somewhere to play catch?”

He noted that many of the master plan committee meetings are open to the public, and he suggested that people interested in attending check out the city’s website, www.clevelandheights.com.

James Henke, a Cleveland Heights resident, was a writer and editor at Rolling Stone magazine for 15 years. He is also the author of several books, including biographies of Jim Morrison, John Lennon and Bob Marley. He is on the board of FutureHeights and is co-chair of the Heights Observer Advisory Committee.