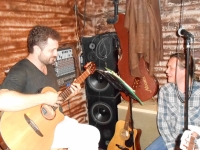 Coventry Village’s Café Bon Appetit has added a new whiskey bar and a performance space for musicians. The new bar and music space are located in the basement of the restaurant, at 2767 Euclid Heights Blvd., and officially opened on Aug. 20.

The bar space can accommodate about 30 people, though it seats just 16. Jay Novak, who owns Bon Appetit with his wife, Jade, said he wanted a bar that was “cozy and quiet, with acoustic music, and a little bit of a dress code.”

Novak recently turned 40, and said he was looking for a small, intimate bar where he could find a variety of whiskeys and hear some music. “I couldn’t find anything,” he said. “And we had available space, so why not open one here?” Novak said that he designed the bar for people about 30 years old and older.

Novak got his liquor license earlier this year and started working on renovating the space. The bar serves only hard liquor, not beer, and offers a number of whiskey options. Novak also plans to offer special cocktails in the bar, as well as a few appetizers.

The live music is mainly acoustic, and the bar will feature jazz, folk and other styles of music. Several artists performed on opening night, including Leah Lou Tater, Stanislav Zabic and Noel Black.

The bar opens at 5 p.m. and closes at 1 a.m. People can enter the bar through the restaurant’s front door or through a back door designated for the bar.

The restaurant opens at 11 a.m. and closes at 9 p.m. When it opened in May of last year, the restaurant offered breakfast starting at 10 a.m. It now offers just a few breakfast items, as it opens an hour later than it originally did.

Café Bon Appetit specializes in healthy food; mainly organic and vegetarian. The restaurant offers a large variety of salads and sandwich wraps. In addition to the Cleveland Heights location, there is also a Café Bon Appetit at East 19th Street and Euclid Avenue, near Cleveland State University.

Novak said that business has been very good since the Cleveland Heights restaurant opened, and he hopes the bar will add to their business.