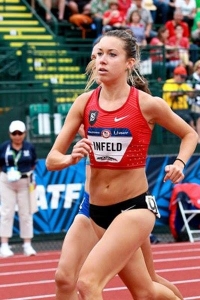 Infeld, the daughter of University Heights Mayor Susan Infeld, came in second in the 10,000-meter qualifier on July 10, and is representing the United States in Rio de Janiero.

A distance runner, Infeld is best known for winning the 10,000-meter bronze medal at the 2015 IAAF World Championships.

Community members are invited to join Beaumont students, faculty, staff, parents and friends of the school for the live watch party, which will be held in the school's dining hall.