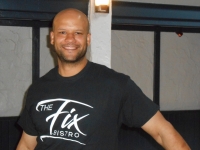 A popular Cleveland Heights business owner is moving down the street, into the space at 2195 Lee Road that was previously occupied by Joey’s Bistro Bar Italiano. Chef Eric Rogers, owner of Black Box Fix, plans to open a new and larger restaurant, The Fix Bistro, on Aug. 23.

Black Box Fix opened at the corner of Lee and Silsby roads in March 2015. Rogers closed Black Box Fix on July 16, and plans to open Sweet Fix Bakery in its place.

“The bakery is going to sell gourmet desserts, pies and pastries,” said Rogers, who hopes to open the bakery by late September.

Joey’s closed in June. Since taking the space over, Rogers has changed the interior lighting, and has touched up and remodeled much of the interior.

On Aug. 13, 2–4 p.m., Rogers will open the new restaurant space for a preview, to offer the community an opportunity to take a look at the kitchen, bar and other features.

The Fix Bistro menu will offer many of the same sandwiches that Rogers sold at Black Box Fix, but will also feature a variety of entrees, including creole dishes and soul food. Rogers plans to offer specials every day, both for lunch and dinner.

“We are going to have a casual atmosphere, but I really want to up the level of fine dining,” Rogers said. He added that the new restaurant will also have live entertainment, including jazz, blues and poetry, and will host a gospel brunch on Sundays.

Rogers noted that business at Black Box Fix had been very good, and he ended with a record number of customers. The Fix Bistro’s larger space will enable him to seat more diners.

The Fix Bistro will seat about 75 to 85 people, and Rogers said he doesn’t want the restaurant to get too crowded. Next year, after the Lee Road streetscape improvements have been completed, he plans to install an outdoor patio in front of the restaurant.