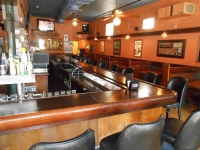 The interior of Brennan's Colony, which closed on Aug. 6.

Brennan’s Colony, a Cleveland Heights institution, closed on Saturday, Aug. 6. Chris Armington, owner of the Tavern Company, and a former employee of Brennan’s Colony, purchased the restaurant and bar, which had occupied the corner of Lee and Silsby roads for close to a century.

The Tavern Company, currently located on Lee Road, also closed at the end of service on Aug. 6, and then moved across the street and down the road to the Colony space.

Prior to the move, Armington said he hoped to open the bar at the Tavern Company’s new location as early as Monday or Tuesday, Aug. 8 or 9, and hoped to start serving food by Wednesday or Thursday, Aug. 10 or 11.

“Jim always thought highly of Chris,” said Murphy, the longtime girlfriend of Jim Brennan. Brennan bought the Colony in 1991 and owned it until he was shot and killed during a robbery attempt in 2014.

Murphy said that, despite reports to the contrary, business had not been bad since Brennan’s death. “Business went down a little,” she said. “But Jim had talked about selling it before his death, and it really just needed a hands-on owner.”

Murphy noted that Brennan did not own the space that the Colony occupied, and explained that Armington purchased the assets of Brennan's Colony Inc., and would be leasing the physical space from the current owner.

Armington has owned the Tavern Company since 2009. Prior to purchasing that business, he worked at Brennan’s Colony from 1997 through 2009.

“I am excited to go back to the place where I started, and I really want to make Jim proud. He was my mentor,” Armington said. “It’s always been my dream to have that space and run it.”

Armington said that his main chef, Jamie Wynbrandt, would be moving to the new location, along with most of the Tavern Company’s other employees. He was not sure how many of the current Colony employees would be able to remain at the restaurant.

Murphy said that she and the Brennan family “would like to thank all of the customers and employees who supported us for so many years, and especially for the last two years. It has been very bittersweet.”

Editor's note: This article was originally published on Aug. 5, and has been updated for publication in the Aug. 9 Heights Observer e-news.