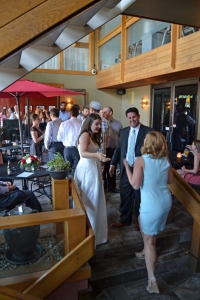 A wedding reception in The Fairmount's new indoor patio/atrium space.

The Fairmount, the restaurant and bar located near the intersection of Cedar Road and Fairmount Boulevard in Cleveland Heights, completed a major expansion and renovation at the end of June.

It has moved into space in the Heights Medical Building that had been occupied by Luna Bakery & Café’s cake-decorating operation (before Luna expanded into part of the Subway space, when that business downsized). The new space is adjacent to The Fairmount’s original space, and the restaurant will primarily use it for private parties, wine tastings and other special events. It features a full bar and table seating, with space for about 40 people.

The Fairmount has also taken over what was essentially an interior lobby for the building, transforming the dated and underutilized area into an innovative indoor patio/atrium that seats about 25.

The original restaurant space seats about 75 people inside and 65 on the back patio. The renovations expand The Fairmount’s full capacity to accommodate about 200.

Jake Orosz, who has owned The Fairmount since November 2011, said he decided to expand because business has been going very well, and he knew there would be a need for more space.

“I like the idea of having separate, smaller spaces,” he said. “It comes down to modularity. We can use the main restaurant solely if business is lighter. Then, at busier times, we can utilize the additional spaces and increase our capacity. So, essentially, we can open spaces as necessary, and we can use them in any combination that we want.”

Orosz, 28, said that the expansions occurred sooner than he had anticipated, “But the space became available, and I thought it would be good to jump on these opportunities.” The first event in the new private-party space was a wedding reception for about 80 guests in late June.

Orosz said he is planning additional changes and enhancements to The Fairmount, which he hopes to complete “in the next two years or so.”

Inside the original restaurant space, he is looking to add wooden chandeliers and new curtains to cover the windows that face onto Fairmount Boulevard. He’d like to make changes to the storefront, and add more air-cleaning plants in vintage wine crates inside the restaurant. He also wants to install a fire pit in the outdoor patio. And, he plans on displaying old blueprints of the building, which he recently found in the basement.

James Henke, a Cleveland Heights resident, was a writer and editor at Rolling Stone magazine for 15 years. He is also the author of several books, including biographies of Jim Morrison, John Lennon and Bob Marley. He is on the board of FutureHeights, and he is co-chair of the Heights Observer Advisory Committee.