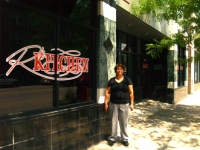 Arlyn Samuels in front of her new restaurant on Cedar Road.

R’s Kitchen, a new restaurant, is slated to open on Aug. 2 at 13441 Cedar Road, next door to the M.T. Glass bar in the Cedar Taylor Business District. While the new restaurant and neighboring bar have different owners, the two businesses already share a close relationship.

M.T. Glass provides drinks for all of the diners at R’s Kitchen, and the restaurant provides food for the bar’s patrons.

“We have a management agreement with M.T. Glass,” said Arlyn Samuels, the owner of R’s Kitchen. “We have a shared space, and we serve each other’s patrons.”

In fact, when R’s Kitchen first started serving food, on June 10, all of its seats were located next door, in M.T. Glass.

Previously, M.T. Glass had a similar relationship with Seafood Place, formerly located in the R’s Kitchen space. When the owners of Seafood Place moved that business to Lee Road (next to The Rib Cage, which they also own), Roy Juresko, the owner of M.T. Glass, wanted to find a new restaurant with which to partner.

Samuels’ husband, Tom Burrows, has been a regular at M.T. Glass for many years, and Juresko knew that Burrows’ wife was in the food business. As a result, they worked out a deal for Samuels to open her own restaurant. (Juresko rents the space where R's Kitchen is located from the building's owner.)

A Cleveland Heights resident, Samuels, 56, grew up here. After graduating from Heights High in 1978, she attended both Ohio University and Cleveland State University. She worked in industrial sales for about 20 years before she got into the cooking business.

That said, Samuels has loved cooking since she was 11. “When I was in school, I would call my mom when I got home, and she would tell me what to make for dinner,” Samuels recalled.

In the late 1990s, she decided to make cooking her career. She started working at O’Rielly’s Pub in University Heights. A couple of years later, she decided to attend culinary school at Cuyahoga Community College, where she earned a degree in hospitality management in 2009. She then worked at the Sans Souci restaurant in Cleveland’s Renaissance Hotel until last November, when she decided she wanted to open her own restaurant.

Asked how she came up with the name for her new restaurant, Samuels explained, “Because my name is Arlyn, a lot of my friends call me 'R,' and then since Roy's name begins with an 'R,' I thought it would make sense to call it R's Kitchen."

R’s Kitchen offers an eclectic menu. Starters include calamari, egg rolls and poppers—jalapeño peppers stuffed with house-made pimento cheese. Several homemade soups are available daily, as well as chili and salads. Also on the menu are a variety of sandwiches and burgers, and entrees such as chicken piccata, braised-beef short ribs, and fish and chips.

“I try to keep everything fresh and local when possible,” Samuels said. “I also like to offer vegetarian options, and we change our egg rolls every day.”