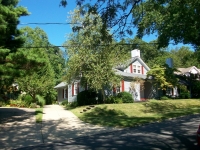 Nestled off of a cul-de-sac, the Adams-Long house at 3555 Birch Tree Path sits on a parcel of land that was once part of the Elisabeth Allen Prentiss estate, Glen Allen. The Adams-Long house is the only building from that grand estate to have survived. Built in 1860 for the Adams family, the structure was later incorporated into the estate, and was likely used as a worker’s cottage.

The house has undergone multiple additions and transformations to make it a viable 21st-century home. Current owner Bruce Long has lived in the house since 1956. He was unaware of the history of the home prior to purchasing it. Afterward, he learned of its unique history and was honored to have the home landmarked by Cleveland Heights in 1984.

Over the years, various owners added to the size of the home and altered the façade to look more like a postwar colonial-style residence. The Adams-Long house now blends in with neighboring ranches and colonials along the adjacent street, Glen Allen Drive.

The home’s landmark status is significant not only because of the age of the structure, but also because it is one of the last tangible links to the Severance and Prentiss history in Cleveland Heights. These two families were significant in the history of Cleveland and its development.

Migrating from Euclid Avenue, the Severance and Prentiss families chose Cleveland Heights as their new home and established grand estates with wonderful gardens surrounding homes of incredible design and materials. The lifestyle of these families was not sustainable after the Great Depression, and the homes were eventually demolished as the cost to run the properties was too great.

Slowly, new development took place with the advent of Severance Town Center, one of the country’s first indoor shopping malls, built on the former site of the great Severance estate. Small, affordable postwar homes, like those along Glen Allen Drive, were built on the former site of the Prentiss mansion and grounds. Amongst them, 3555 Birch Tree Path sits as a reminder of all that came before and as an example of how older properties can be transformed to meet current standards of living.

Margaret Laan is a member of the Cleveland Heights Landmark Commission, which preserves and protects buildings, works of art and other objects of historical or architectural value to the community. The seven members are appointed to three-year terms by CH City Council.