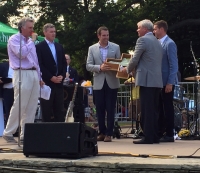 On July 13, BP will present Motorcars Honda of Cleveland Heights with its Carbon Neutral Award, making it the first automotive dealership in the world to achieve this distinction. BP created the award as part of its Target Neutral program, and will bestow the award as part of University Circle’s Wade Oval Wednesdays celebration.

BP Target Neutral is an independently advised nonprofit program that aims to reduce the carbon footprints of both businesses and individuals. Motorcars Honda gained the program’s attention after achieving the title of eighth-greenest dealership in the U.S.

“We are eliminating the carbon footprint for every new and used cars sold, all of our employees’ cars, parts truck, rental cars, shuttle vans, and owners’ personal travel tied to work,” said Trevor Gile, managing partner at Motorcars Honda.

“Five years ago,” he noted, “we never thought that we would be going down this path. But as our employees became more involved and concerned with the environment, we started to learn about some of the various options available to help.”

Founded in 1971, Motorcars Honda has received many awards, including Honda’s Environmental Leadership Platinum award, Green Energy of Ohio’s 2015 Ohio Business of the Year, and DealerRater’s 2016 Dealer of the Year for Ohio.

Lori Goldberg is an intern at the Heights Observer. Though a recent graduate of Shaker Heights High School, Cleveland Heights is like a second home to her. She hopes to continue writing, professionally or not, for the rest of her life.