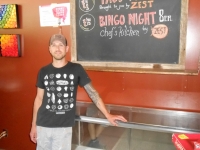 Four years after it opened, BottleHouse Brewery is expanding its food menu, which formerly comprised mainly sandwiches and charcuterie boards.

The brewery, located at 2050 Lee Road in Cleveland Heights, is also instituting a new program to benefit nonprofit organizations.

“Cleveland Heights has given so much to us,” said owner Brian Benchek. “We wanted to give back to the community.”

“I want to use this space in a way that gives back to the community,” Benchek said.

Benchek, 39, has owned the brewery since it opened in May 2012. Originally, he was a co-owner with Dave Schubert, but two years ago he bought Schubert out and became the sole owner.

When BottleHouse opened, Benchek’s initial idea was to have food trucks come by and sell food to the brewery’s customers, but the City of Cleveland Heights would not allow that.

More recently, Benchek thought he should add some chefs from the area to the brewery’s team. After talking to several chefs, Benchek decided to team up with Mickey Venditti, who operates Zest Cleveland Catering. “He will be here three to four nights a week,” Benchek said. “We are finally bringing the quality of the food we have here up to the quality level of the beer we sell.”

“No one really came here to eat,” Benchek added, “but as the food scene in Cleveland keeps growing, there are just so many amazing food options. We wanted to make some of those options available to our customers.”

Benchek noted that Venditti is a classically trained chef who worked in New Orleans for about six years. He received his degree from the Culinary Institute of America.

Venditti started at the BottleHouse in July, and every Thursday and Friday night at the brewery will now be Chef’s Kitchen night, presented by Venditti. Tuesday nights will be designated Taco Tuesdays.

In addition to Chef’s Kitchen nights and Taco Tuesdays, Benchek is considering special beer dinners, Oktoberfest dinners and other special food options. He also plans to work with other chefs, in addition to Venditti. “I want to give chefs the opportunity to bring their creativity into our mix,” Benchek said.