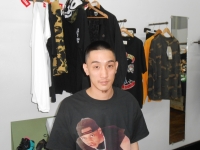 Anthony Ho in his new clothing store on Coventry Road.

A new clothing store has opened in Coventry Village. Called Blueprint Boutique, the store opened on July 2 in the space previously occupied by Heart and Sole, at 1781 Coventry Road.

The new store sells the same brands of sneakers that Heart and Sole used to sell, along with hard-to-find brands of clothing, most of which are otherwise available only at retail stores in New York City.

“We carry a wide variety of street-wear brands, and we also have vintage clothing from the 1990s, like old T-shirts,” said Anthony Ho, owner of boutique. Among the brands that his store carries are Supreme, a specialized street-wear brand, and Bathing Ape, a New York City label.

“The younger people around here are more the kinds of kids I want to cater to,” Ho said. “The clothing I carry is the kind that many young people like, but they have to buy it on eBay or at a store in New York. It’s not stuff you can get anywhere else in Cleveland.”

Prior to opening Blueprint Boutique, Ho owned two other stores in the Cleveland area. He opened his first store, United Sneakers, on Madison Avenue in Lakewood in 2013, and owned it for about a year before he sold it to Joe Haden of the Cleveland Browns. He then partnered with Haden to open Restock, a clothing and sneaker store on Prospect Avenue near the Quicken Loans Arena. “When my contract with that store expired, I decided it was time to open this store,” Ho said.

Vince Manzano, who owned Heart and Sole, said he was looking for something different to do. “I was here for eight and a half years, and I had become interested in other things,” he said. When Ho contacted him, Manzano agreed to sell the store. The sale took place in early June.

Ho said business so far has been better than he expected. “When we had our grand-opening day on July 2, there was a line of about 40 to 50 people waiting for the store to open,” Ho said. Almost everyone who came in on opening day bought something,  and Ho estimates he had $8,000 in sales on the store’s first day.

Ho, 28, was born in New York City. His parents moved to the Cleveland area when he was 5, and he grew up in Parma Heights. He attended Valley Forge High School, Cuyahoga Community College and Cleveland State University, though he did not graduate from either college. He currently lives in Cleveland’s Asia Town.

Ho said he is a big fan of the rapper Jay-Z, and named the store after Jay-Z’s 2001 album, The Blueprint. He said of Cleveland Heights, “I like this neighborhood, and I really like the people. I’ve enjoyed every minute that I have been here!”

Blueprint Boutique is open seven days a week. It opens at noon each day, and is open until 8 p.m. Tuesday through Saturday, and until 6 p.m. on Sunday and Monday.

James Henke, a Cleveland Heights resident, was a writer and editor at Rolling Stone magazine for 15 years. He is also the author of several books, including biographies of Jim Morrison, John Lennon and Bob Marley. He is on the board of FutureHeights, and he is co-chair of the Heights Observer Advisory Committee.