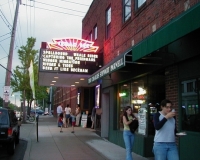 On June 3, Independent We Stand—an organization that supports independently owned and socially responsible businesses, and promotes the importance, and benefits, of “buying local”—announced that downtown Lynden, Wash., was the grand-prize winner of its America's Main Streets 2016 contest. According to Tara Mazzarella, a representative of Independent We Stand, the Cedar Lee Business District ranked an impressive fourth among the top 10 semifinalists in the national online voting competition that recognizes the important role that main street commercial districts play in the long-term success of communities.

In March, FutureHeights nominated Cedar Lee for the contest, and launched a campaign to encourage residents and others to vote online every 24 hours for the district—named one of 25 quarterfinalists from across the country—through April 24.

“This year provided a great opportunity to nominate Cedar Lee because of the $3.5 million Lee Road streetscape improvements that broke ground in May,” said Deanna Bremer Fisher, executive director of FutureHeights. “Additional funding could have helped enhance the area further, which is now undergoing planned improvements for pedestrians and bicyclists, with new crosswalks, lighting and amenities, such as bicycle repair stations. During this construction phase, it’s especially important that our community continue to patronize these local businesses."

The business district received considerable media attention during the contest, including a live TV interview on WKYC Channel 3 News with Bremer Fisher and Adam Fleischer, co-owner of Cedar Lee’s The Wine Spot. (Watch the interview at www.wkyc.com/news/cedar-lee-in-the-running-for-25k-grand-prize/216587913.)

Thanks to the many votes cast by residents, business owners and visitors, Cedar Lee became a top-10 semifinalist in the contest—the only one in Northeast Ohio, and one of only two in the state. Voting for semifinalists took place May 2–29.

Heights High, at the intersection of Cedar and Lee roads, is undergoing a $95 million renovation that will be completed in the fall of 2017. The renovation will reveal the building’s historic 1926 façade, make its auditorium and swimming pool more accessible for community use, and move it into the top 5 percent of the EPA's ranked schools for energy efficiency.

Lee Road Library, at the south end of the business district, is the main branch and administrative headquarters of the Cleveland Heights-University Heights Public Library System, and hosts a variety of programs, including the Heights Knowledge and Innovation Center, which supports the technological and workspace needs of local businesses, nonprofits and individuals.

The district is served by the Cedar Lee Special Improvement District (CLSID), formed in 2003. For more information, visit www.cedarlee.org.

Lynden, Wash., came out on top based on the number of votes cast, winning $25,000 in cash and prizes to help revitalize its main street. Its downtown is making a comeback after a fire destroyed a large mixed-use building that anchored the district in 2008.

To learn more about Independent We Stand, visit www.independentwestand.org/learn-more/about/.