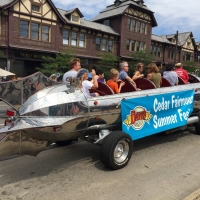 The Cedar Fairmount Special Improvement District (CFSID) has announced special programs planned for this summer. They include two free concerts, and the annual Summer Festival.

Cedar Fairmount restaurants will offer takeout food that attendees can eat on the green while watching the show. In case of inclement weather, the concerts will move inside to Nighttown.

On June 16, Moises Borges and Kenny Davis will perform. A native of Brazil, singer and guitarist Borges performs in the bossa nova tradition, interpreting classics by Jobin, Gilberto and others.

Davis, a trumpeter, was a member of Duke Ellington’s orchestra in the 1970s, and also played in the house band at the legendary Cleveland club Leo’s Casino. At Leo’s, Davis backed major Motown acts, including Stevie Wonder, Marvin Gaye and Diana Ross. He is a retired member of the jazz faculty at Oberlin College, where he taught for 20 years.

The July 21 concert will feature Cleveland-based singer-songwriter Morgan Mecaskey. A former member of the local indie/folk band Tinamou, Mecaskey made her solo debut in 2012, when she released the EP Righteous Kind. Her most recent recording is Lover Less Wild. Mecaskey has been compared to singer-songwriter Jeff Buckley. Her forceful presence, deliberate arrangements and confident handling of the guitar creates a memorable musical experience.

This year’s festival will take place on Sunday, Aug. 7, from noon to 5 p.m. As always, it will include a variety of entertainment for people of all ages. The Euclid Beach Rocket Car will be back, and there will also be a bounce house—a big castle inside of which children can bounce up and down—and a mini monster house. Both houses will be in the parking lot of the Fifth Third Bank. In addition, four famous movie characters—Cinderella, Elsa, Batman and the white soldier from Star Wars—will meet and greet festival attendees.

Once again, the festival will feature live music. Musical Mark will perform a show for kids, and three popular Greater Cleveland bands—Old Boy, the Get Back Duo and Eclectic Vision—will play at the event, as will Mark Goldstein, another local musician.

Local artists will display and sell their artwork the arts and crafts area, and the Roxboro Elementary School PTA will sponsor an art exhibit featuring work by some of its students.

“We are very excited about this year’s festival,” Lowe said. “And we are very proud that this has grown and that the community embraces it.”

Cuyahoga Arts & Culture gave the neighborhood a $3,500 matching grant to help fund the event, and seven other organizations— the Cedar Grandview Building, Dave’s Markets, the Heights Center Building, the Heights Medical Building, Fifth Third Bank, New Vista Enterprises and CFSID—are Elite Sponsors, having donated at least $500 toward the cost of the event.

For more information about the Cedar Fairmount’s summer concerts and festival, visit www.cedarfairmount.org or call 216-791-3172.