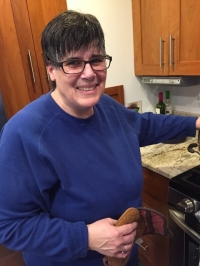 Eustathea Kavouras in her home kitchen.

Eustathea Kavouras, owner of Greedy Girl Ethnic Street Flavors, a new restaurant specializing in Greek and Indian street food, is working toward a summer opening at 2158 Taylor Road, next to Mister Brisket.

This is Kavouras’ first foray into the food business. For the past 22 years, Kavouras, 60, has been a physician assistant at various area hospitals. But, she said, she has always wanted to own a restaurant: “It’s been a dream of mine since I was 12 years old. I have been cooking all of these years, and I decided it was time to do it.”

“I was raised Greek, and I began cooking Greek delicacies with my mother and grandmother when I was 4,” Kavouras explained. “Then I spent time with an Indian family, and my adopted culture is Indian. I visited India several times, primarily learning how to cook their foods.”

“I wanted to bring the foods I love to my hometown of Cleveland,” Kavouras said. “This means more than anything to me. The food at Greedy Girl is deeply rooted in two ancient cultures that value the depth of flavors. I believe my food will be well-received by those looking for authentic ethnic food that isn’t frozen, microwaved or processed.”

Kavouras said that “street food” refers to foods that are easy to eat on the go. Greedy Girl will serve breakfast and lunch, but not dinner. The restaurant will open at around 6:30 a.m. and close at 6 p.m. The restaurant will feature counter service, where customers will order food at the counter, and take it to go, or sit down at a table and eat in the restaurant.

Greedy Girl’s breakfast menu will include Indian- and Greek-flavored omelet rolls, which Kavouras said are “not traditional omelets.” It will also include Greek spinach pies and potato crepes with Indian spices.

The restaurant’s lunch menu will include rolled sandwiches with lamb and chicken, and traditional Greek dishes, such as stuffed grape leaves and Greek salads. Kavouras stressed that Greedy Girl will serve authentic Greek food, not food that is a mixture of Greek and other middle-eastern dishes. “We will not have gyros and such,” she said. “We will have a meat sandwich that has gyro spices.”

In addition, the restaurant will offer traditional Greek desserts, including pecan-salted chocolate chip cookies, and on weekends Kavouras will serve Greek donuts.

Kavouras was born in Cleveland’s near west side, where she grew up. She has lived in Cleveland Heights on and off since 1995, and will soon be moving to the city’s Cedar Lee neighborhood.

Kavouras said that family members came up with the name Greedy Girl. She has so far raised more than $44,000 to open the restaurant. The money was needed to renovate the space and buy all of the kitchen equipment. She is still trying to raise money on a website called Indiegogo. “It takes a village to undertake something like this,” she said.

She is confident that the restaurant will be a success. “I think that Clevelanders who like ethnic foods will flock here,” Kavouras said. “No other restaurant in this area has served the kind of food I will be serving,” she said. “It really is a Cleveland first.”