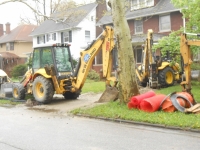 The pipeline infrastructure replacement program, launched in 2008, is a $4 billion project expected to last for 25 years. The utility will replace 5,500 miles of pipe within its 22,000-mile system.

According to Alex Mannarino, the Cleveland Heights director of public works, the Dominion project started in Cleveland Heights in 2010, with work on Euclid Heights Boulevard, Taylor Road and a few other streets. Mannarino said that many of the gas lines being replaced are more than 100 years old. According to Dominion spokesman Neil Durbin, the company is replacing bare-steel, cast-iron, wrought-iron and copper pipes with coated-steel or plastic ones. The existing pipes are safe. The new ones will be more durable and resistant to corrosion.

At press time, work was underway on Euclid Heights Boulevard, from Coventry Road west to the city line, and on parts of Fairmount Boulevard and Coventry, Fairfax and Coleridge roads.

Occasionally, trees must be removed to accommodate the project. More than 30 mature trees were removed from Lee Road tree lawns between Euclid Heights Boulevard and Mayfield Road earlier this year. Mannarino stated that, after performing geological studies in the area, Dominion determined that that stretch of Lee Road would have to be excavated for gas-line work, which would require removal of some tree roots, thus setting up a potentially hazardous situation if the trees were left standing. In most situations, horizontal drilling can be used, which does not necessitate removing trees.

Though gas-line work has yet to begin on Lee Road, an environmental bulletin regarding bat-habitat protection required the trees to be removed before March 31.

Mannarino said that Dominion is paying for all aspects of the project. “There is no cost to the city, whatsoever,” he said. In addition, whenever any trees are removed, Dominion pays for replacement trees. Similarly, if Dominion has to tear out a sidewalk to replace a line, the company will replace it, and, if it was a stone walk, the property owner can decide whether to have it replaced with stone or concrete.

Any tree lawns or grass-covered areas that Dominion must dig up are re-seeded by the company. Mannarino noted that tree-lawn size and overhead obstructions are considered when deciding what kinds of trees are used to replace trees that have been removed.

Durbin noted that Dominion’s customers will not see additional costs to their monthly gas bills. “Ever since we started this program back in 2008, all of the costs have been covered by our customers’ monthly gas rates,” he said. “There are no additional costs if any work is done on someone’s property.” He said that customers can go to the company’s website, www.dom.com, and search “pipeline infrastructure replacement,” to get more information about the project.