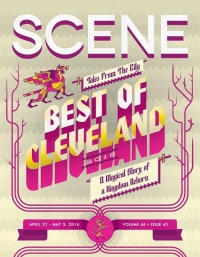 Scene magazine announced its Best of Cleveland 2016 list on April 27, and Heights businesses were well represented on it, placing in five of the six categories: Arts & Entertainment; Food & Drink; Shops & Services; Bars & Clubs; and People & Places. Scene publishes the list annually as "a guide to the best of all that is happening" in Greater Cleveland.

Scene named In the 216, at 1854 Coventry Road, Best New Store. In the 216 also won Best Store to Find a Piece of Cleveland for its Cleveland-proud merchandise.

“We are very humbled by the recognition,” said Jenny Goe, owner of In the 216, which features all Ohio-made products.“We have worked very hard to gather an eclectic group of artists and artisans from Cleveland and other parts of Ohio. Mostly, we are so excited that the 104 creatives represented in the shop have been awarded this honor. They are everything, and the past year would not have happened without all of them.”

Scene’s Best Classical Music Group/Project, Apollo’s Fire, is headquartered in the Heights Rockefeller Building in Cleveland Heights. Melt Bar & Grilled, with six locations—including one at the corner of Cedar and South Taylor roads in Cleveland Heights—won for Best Sandwich. PetPeople, winner of Best Pet Shop, opened a location at the Cedar Center South Shopping Center in University Heights on April 15.

Heights winners are listed below, by category:

Lori Goldberg is an intern at the Heights Observer, and a senior at Shaker Heights High School. Cleveland Heights is like a second home to her. If asked to pick a favorite business in the Heights, she would be torn between Tommy's and Big Fun.