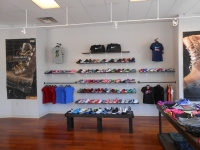 Inside the new Culture store on Lee Road.

A new Cleveland Heights store opened in mid-April, at 2150 Lee Road, on the southwest corner of Cedar and Lee roads. Called Culture Footwear and Apparel, the store is located in the space that had been occupied by Abrash Gallerie for 11 years. Abrash closed on Sept. 7, 2015.

Culture sells a variety of urban apparel for both men and women, including sporting clothes and athletic boots and shoes. The Cleveland Heights store is the third Culture location to open in Greater Cleveland within the past year. The first Culture store opened last June in the Fifth Street Arcade in downtown Cleveland, and a second store opened in April, at 16832 Chagrin Blvd. in Shaker Heights.

Morad Ali, a 33-year-old who grew up in Westlake and currently lives in downtown Cleveland, owns all three stores.

After graduating from high school, Ali studied business management at Cuyahoga Community College. Neither he nor any of his family members have a background in the retail business. “But I did a lot of shopping when I was younger,” he said. “I would go to Beachwood Place mall a lot, because all of the stuff I liked was there.”

A few years ago, Ali opened a store called The Walk, at East 55th Street and Superior Avenue, that sold shoes for men. About a year ago, someone came into his store and told him about the available space in the Fifth Street Arcade. He decided to close the East 55th Street store, open Culture in the arcade, and expand his offering of products.

Ali said that he had long wanted to have a store in Cleveland Heights. At one point, he said, he looked at a space next to Edible Arrangements on South Taylor Road, but he wasn’t able to work out a deal.

“One day I saw that the Abrash space was available, and I instantly knew I had to have it,” Ali said. “I love it here, and this was the best business decision I’ve ever made.”  Expressing his great love of Cleveland Heights, Ali said, “I love the people, and I love everything else about this city. There’s nothing I don’t like here.” In the near future, said Ali, he plans to move from downtown to Cleveland Heights.

Ali noted that his first week of business at the Cleveland Heights store was excellent, and sales were high. While most of his customers are teenagers and young adults, he said he also has many older customers. “Our stock is a mix of athletic items and other things,” he said. “We carry a lot of athletic shoes, but we also carry casual shoes.”

“I always wanted to have multiple locations for my stores,” he said. “That way, you get better name recognition. Already people coming into the new store ask if it’s affiliated with the downtown store.”