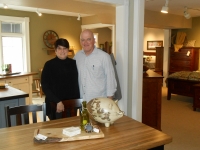 Angie and Ron Nandor, the owners of Eastwood Amish Craft Furniture, inside their new store.

A new furniture store has opened in Cleveland Heights. Called Eastwood Amish Craft Furniture, the store is located at 3451 Fairmount Blvd., at the corner of Fairmount and Taylor Road.

The space was previously home to Paysage, which also sold furniture and home-décor items.

The Eastwood store is different from other furniture stores in the area. Amish craftsmen from Ohio make all of the furniture the store sells. In addition, customers can request that the craftsmen create specific, customized furniture items, made to their specifications.

The store opened in mid-February, and the husband-and-wife owners, Ron and Angie Nandor, are planning to have a formal grand-opening event on Saturday, April 16.

“We’re going to bring some of the craftsmen up here, so people can meet them and see how things are built,” Ron said. They also plan to offer some giveaways and specials at the grand opening.

“You can come into the store and look at the furniture and then have it transformed into what you want,” said Ron. “You can change the size, the type of wood and just about anything else. That’s why our slogan is ‘Your way for your home.’ We will make the furniture exactly as you want it.”

“You really can get exactly what you want,” added Angie. “Some people come in with pictures and dimensions, and we will have the craftsmen build the exact piece of furniture that they want.”

The Nandors have lived on Kenilworth Mews in Cleveland Heights for the past two years. “We grew up in Pittsburgh, but we are longtime Ohio residents,” said Ron, who’s 56 years old. “We lived in Strongsville for many years, then we moved to Kentucky for a couple of years. But Cleveland Heights is such a unique area. We really love it here.”

The Cleveland Heights store is the third Eastwood furniture store in Ohio. The original store is in Kidron, in Wayne County, between Canton and Wooster. The other store is in Medina. An Amish family opened the Kidron store in the 1990s, and the Nandors bought it in 2005. They opened the Medina store in 2006.

Prior to purchasing the stores, Ron worked in the paint industry at PPG Industries and Sherwin-Williams. Angie was formerly a social concerns coordinator for the Catholic Diocese of Cleveland, working with volunteers.

“We decided that we wanted to try and have a small business of our own,” Angie said. Her brother, Lee Pagani, had experience in the furniture business, and they thought Eastwood would be a good fit. Pagani is now retired and no longer working with the Nandors.

“The quality of the furniture we sell is excellent,” said Angie, who’s 54. “Everything is built with solid wood, and we don’t use any veneers. We use about 100 different craftsmen in Wayne County and Holmes County to make the furniture.”

The store sells just about every kind of furniture, including items for dining rooms, bedrooms and offices. It also carries kitchen islands, bar stools, chairs, TV stands, mantelpieces and shelving.

The store is open Tuesday through Saturday, from 10 a.m. to 5 p.m. It is closed on Sundays and Mondays. For more information, and to see a selection of the furniture available from Eastwood, visit www.eastwoodfurniture.com.