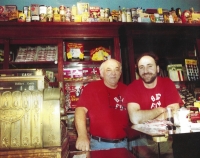 On Friday, April 1, Big Fun will mark its 25th anniversary.

Owner Steve Presser said that he is delighted that his store has been around for 25 years. “It’s unusual in this day and age to have any longevity,” he said. “With the Internet and everything else, it’s become very hard for retail stores to survive. But fortunately, we have made it! And the idea is for people to come into the store and shop and have the experience.”

In celebration, on April 1, the iconic toy store, located at 1814 Coventry Road, will offer 25 percent off the price of every item in the store, and customers will be invited to enjoy slices of cake.

Big Fun opened on April 1, 1991. The store was originally located across Coventry Road from its current space, in the spot now occupied by Jimmy John’s sandwich shop. It moved to its current location in October 2005.

Presser, 58, grew up in University Heights, and graduated from Cleveland Heights High School. He then studied pre-med at the University of Michigan. “When I was in college, I became really active in buying vintage clothing, furniture and toys,” he said.

After graduating from college, Presser decided not to pursue a medical degree. Instead, he started working for PVA Circle of Homes. ”It’s a nonprofit organization that provides direct care to people with severe mental retardation,” Presser explained. He left PVA in 1983 and took a job as a stockbroker at Paine Webber and Company in Beachwood.

Meanwhile, in 1982, while on a trip to Chicago, Presser discovered a store called Goodies. “When I walked into that store, it changed my life,” Presser said. “It was a small store, but it had all of these old toys that were still in new packages. They just had a lot of new old stock. It was like going to a rock concert for the first time.”

Presser became friends with the store’s owner, Ted Frankel. “I told him I was interested in opening a toy store,” Presser said. “And I started going to 20 or 30 house sales a week. I was accumulating merchandise, which I stored in my parents’ basement.”

Frankel eventually closed Goodies and opened a store called Uncle Fun. He was also helping Presser with his plan to open a store. Originally, Presser was going to name it Starvin’ Marvin’s Fun House (Marvin being Presser’s father). Then, Frankel suggested Big Fun, and that became the store’s name.

Asked what his favorite toys are, Presser said he loves Rock’em Sock’em Robots. “Also, I really like toys from my childhood,” he added. “I grew up in the ‘60s, so I like ‘Lost in Space,’ ‘Man from U.N.C.L.E.’ and ‘The Munsters.’”

Big Fun gets visitors from all over the United States. “We’re fortunate in that we have been on a lot of best-of lists,” Presser said. “And, in fact, Playboy’s website named us one of the 20 coolest stores in America. So when people come to Cleveland, a lot of them will come to Big Fun and check us out.”

The store draws some famous customers, as well. “A lot of bands will come here when they are in town for a show,” said Presser. “Fred Schneider of the B-52’s has been here a lot, and Anthrax, Pantera and other bands have come by.” He noted that comedian and actor Paul Rudd has also been to the store.

Presser said he loves being part of the Coventry neighborhood, and really appreciates how many people have helped him along the way.

“I’m blessed to have a handful of people who have been mentors and who made me appreciate life,” said Presser. He praised Tommy Fello, the owner of Tommy’s restaurant, two doors down from Big Fun. “Tommy is not only a mentor, he’s a good friend,” he said. “As a human being, he’s been innovative. He offers a lot of kindness to his staff and his customers, and he’s a tireless volunteer. He is not only involved in his business, but in the neighborhood around him. And I am very proud of what we have done with this neighborhood.”