by Jennifer Holland and Gennifer Hurtt 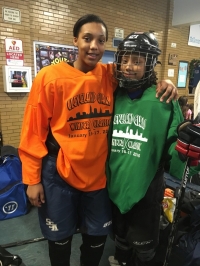 If you’ve recently attended a Heights High hockey game, a AAA Pee Wee boys hockey game, or a 14U (age 14 and under) girls hockey game in Cleveland Heights, you may not have been able to identify who was beneath those massive helmets. Chances are good, however, that you were watching one of Charone and Robert Edwards' four children tearing up the ice.

For the Edwards family, hockey is a lifestyle. Robert, a local painting subcontractor, played for Heights High as a teen and has been involved with adult men’s hockey leagues. Bobby, 17, is a senior at Heights High and captain of the Heights High hockey team. Colson, 8, plays youth hockey. Chayla, 14, and Laila, 12, both started playing in the Cleveland Heights Youth ADM Hockey Program, based at the Cleveland Heights Recreation Center, before they were 8 years old.

Ever since they started playing, the girls have progressed impressively, playing elite hockey (AAA) with boys for the Cleveland Jr. Lumberjacks and Cleveland Barons respectively, and competing against the top boys’ teams from other cities. Laila and Chayla also participate in the Pittsburgh Penguins Elite Girls hockey program, one of the top girls programs in the country. Last year, Chayla made it to the national championship game with the Penguins.

Having positive female role models early on inspired the girls to pursue their own success in the sport. They watched other girls, such as sisters Kasidy and Kendal Anderson, Ann Marie Fitzgerald, Lauren Bernard and Lora Clarke, excel on the ice, often against boys.

Despite the time and energy commitment hockey demands, both Chayla and Laila have excelled academically, and both also play the violin. Chayla, a ninth-grade honors student at Shadyside Academy, a boarding school in Pittsburgh, won the Outstanding Math Student of the Year Award last year at Roxboro Middle School. She now attends Shadyside in order to continue playing with the Pittsburgh Penguins Elite team, which she has been a member of for six years.

Laila, also an honors student, is a sixth-grader at Roxbobo Middle School. As a fifth-grader, she won the Roxboro Elementary School spelling bee.

"I'm so proud of the girls’ tireless efforts to work hard and be better at the game . . . getting up at 5 a.m. to get extra skills on a school day and then going back for more practice; possibly missing social events that a pre-teen and teenager normally would have," said their mother, Charone Edwards, an Oxford Elementary School employee. "I admire their drive and will to be the best!"

"I have had the pleasure of competing with and against two very special young women in the sport of hockey," said Taylor Clark, assistant coach with the Pittsburgh Penguins Elite 14U and Cleveland Lumberjacks teams. Clark, a former Michigan State hockey player, is currently Chayla's coach, and coached both girls when they played with the Ohio Flames. "I think the world of both Chayla and Laila Edwards. What both have already accomplished and what they are about to accomplish in the game of life cannot be underestimated. When their names are brought up in conversation, I always use the word 'polished.' Both are an inspiration to young girls."

Both girls have been invited to play internationally this spring and summer, as members of West Coast Selects teams—part of the Selects Organization, which brings together elite female hockey players from across North America to compete with some of the best international players. Laila has been invited to play with the U14 West Coast Selects in Sweden and Finland in April; in Chicago and Toronto in May; and in Rochester in June. Chayla has been invited to Minnesota in March for nationals; to Chicago and Toronto in May; to Rochester in June; and to Minnesota and Prague in July.

The Edwards family has devoted much time and resources to supporting their children’s hockey pursuits, and the financial commitment has been both worthwhile and immense. To help offset the costs, three fundraisers are in the works to help Chayla and Laila pursue their hockey-playing goals.

On Feb. 27, the Edwards family will host a #TeamEdwards Write a Check Campaign at their home, where attendees are asked to make a donation toward the goal of raising $30,000 to cover expenses for the trips. Both girls will attend the event, and speak about their experiences.

On April 9, supporters are invited to the Team Edwards Gala at Bodega Restaurant and Lounge, 1854 Coventry Road, 3–6 p.m.

To purchase raffle tickets or tickets for the gala, e-mail jggroup216@gmail.com.

Jennifer Holland and Gennifer Hurtt are partners of the JG Consulting Group, a concierge firm that includes event planning among its services. They are the event planners for the Edwards sisters' fundraisers.